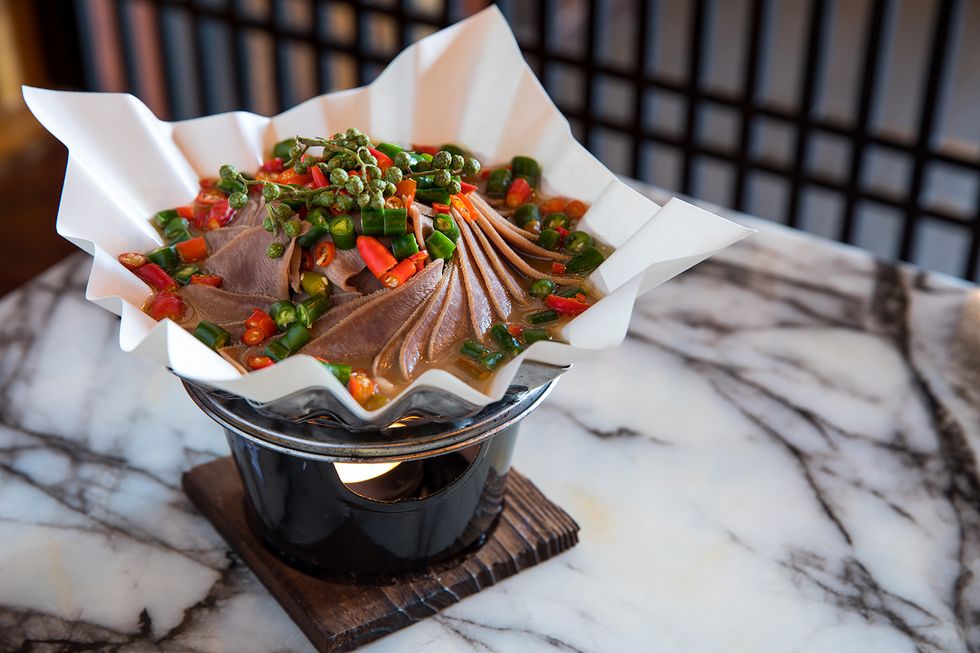 Houston’s newest restaurant mogul looks nothing like the stocky, bearded bros who have dominated Houston’s food scene for the last several years. Instead, 40-year-old Yunan Yang, the owner of the burgeoning chain of Pepper Twins restaurants, is pixie-ish. Standing five-feet tall, she hums with youthful energy, simultaneously directing staff, texting on her phone and chatting with a journalist. She quickly flits between flirtatious smiles and stern looks of serious self-reflection, especially when recalling the unusual journey that brought her to Houston from China via Wisconsin.

“I want to open a total of 88 restaurants,” she says definitively. So far, in barely three years, she has six in Houston, with another planned for later this year, and possibly another in Washington D.C. Hitting eight locations would be auspicious: Eight is considered the luckiest number in Chinese culture — the number eight, when spoken, sounds like the same word as the one for “wealth.” And her goal of opening 88 restaurants is, naturally, doubly auspicious.

Born in Chongqing in Sichuan province, Yang studied medicine. “But my family wanted a boy, so it was like I was fated to behave like a man.” When she was 30, Yang consulted a fortune teller, a blind palm reader. “First, he said I would meet my future husband and know him by one fact — that he would have recently had a broken bone. Second, he said I would have two children, a girl and a boy. Third, that I would go abroad, where I would finish my education in the north, and build a business in the south.”

Yang met a man who had recently broken his hand, and he, a fellow doctor, became her husband. Together, they moved to Madison, Wisc., where Yang, now a radiologist, continued her research into breast cancer. Then, after having two miscarriages, she gave birth to a girl and then a boy. “The boy’s birth was very difficult,” she says, having said before that the trouble may have been linked to exposure to radiation from her research. “It was after that, with two small children, and a husband who was traveling — at the time he was helping Ebola victims in Liberia — that I thought of moving.” She looked at a map, pointed at Houston, and made a decision. She would move south and open a restaurant.

Her inspiration: She traveled in 2011 to San Francisco for a conference and saw an hour-long line outside a popular Chinese restaurant, which made her think it might be a good business. “Plus, in Wisconsin, we’d drive three hours to Chicago to get authentic Chinese food, and I didn’t want to keep doing that.”

Within a month of moving, she’d signed a lease on her first location, a spot on Fairview in Montrose adjacent to Boheme bar, and opened Cooking Girl in partnership with her sister. The year was 2016, and the food quickly won fans and acclaim; Texas Monthly judged it one of the best new restaurants of the year. After a time, Yang parted with her sister, renamed the restaurant Pepper Twins — after Sichuan cuisine’s signature ingredient and her two children, who are depicted in the logo — and started expanding. There are now locations in River Oaks, on Kirby Dr., in CityCentre, Katy, and Pearland, with the next one coming to the Galleria.

So, how has Yang succeeded in a city where it was already possible to find a surfeit of good-to-great Chinese food? “My ingredients are the best,” she says. “My beef, my pork, my fish are all excellent, organic and locally sourced if possible. This means the food tastes better and is better for you.

“Take chickens for example,” she says. “We use only thigh meat. Why? Because in the U.S., most chickens are raised in cages. They develop these huge breasts and have tiny legs. In China, chickens run around the yard, so they have big legs and small breasts. In China, we call the breast ‘dead meat’ and we don’t eat it. So I only serve the best, free-range chickens — one with big thighs — that way I know they are natural.”

A wall mural at Pepper Twins in CityCentre

As for the Sichuan peppers, which impart a distinctive tingling and numbing sensation, she has those flown in fresh, overnight from China. “They are not frozen like other peppers. We are the only ones in the U.S. who do this. We have a special FDA approval for it.”

While the inspiration may be Yang’s, the recipes are not. “I learned to cook from my mother-in-law, and she learned from her family’s cook,” she says. “So, many of the recipes come from that cook.” But, she adds, most of her chefs have 15 or more years of experience, and many are from China. Ultimately, the aim is “to share the culture of China and make guests healthy and happy.”

In this regard, Yang also remains stays connected to her medical profession. “You see, this is me,” she says, gesticulating with her phone, on which she has pulled up an image of a recently published cancer-research paper from a prestigious medical journal bearing her name as one of the co-authors. She proudly notes that her restaurants offer a discount of 15 percent to researchers who have recently published papers.

With her surplus of energy, Yang is pursuing other passions as well, such as art — she does her own restaurant design, including drawing the images that adorn the chain’s paper lanterns, and she is learning piano. “I want to be good enough to play a concert in four to six months,” she says.

In the meantime, she might open a restaurant or two.

Can This New CityCentre Restaurant Succeed, Where So Many Others Have Failed? Spoiler Alert: Definitely.