As coworking spaces and tech incubators become mainstream in H-Town, an iconic Midtown building is reimagined with the help of a team at Rice. 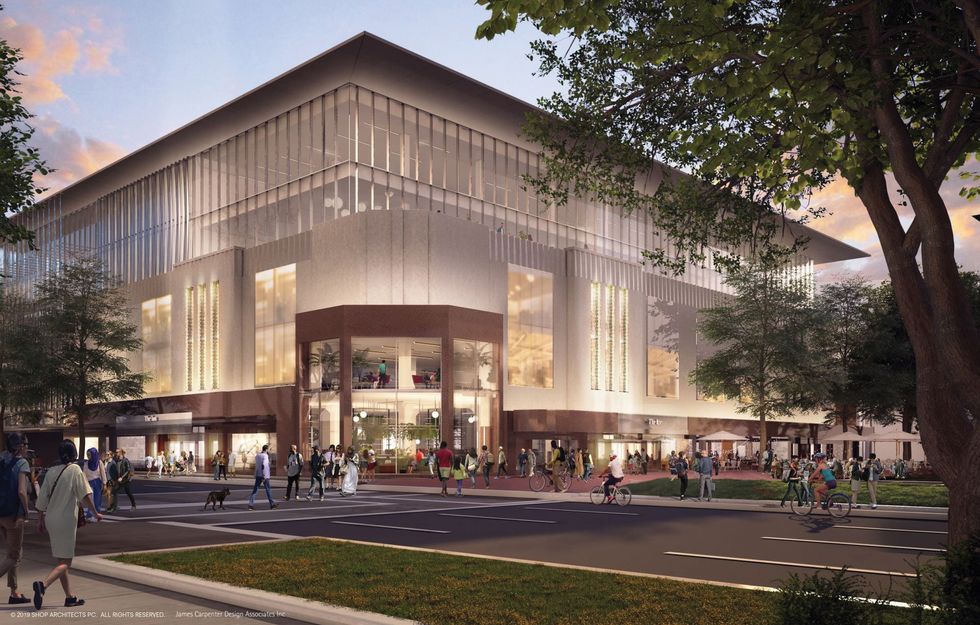 When it opened in 1939, Houston’s flagship Sears store was among the first air-conditioned buildings in the city, and the first department store in the world with escalators. Every modern convenience and shopping need was brought together under one roof in the art-deco masterpiece, a showstopper of its time. But as the decades passed, the building and its Midtown surroundings fell on bleaker times, and their significance faded as wrecking balls loomed.

Now, thanks to a major power play by Rice Management Co., which runs the Rice University endowment, the building is being revitalized as The Ion, a major business startup and technology development hub. It’s not the first or the only “incubator” in town; The Cannon opened a think-tank at I-10 and the Beltway in 2018, and followed it up last year with a location in Downtown’s Amegy Bank building. And the Downtown Development Authority just opened the startup-accelerator Launch Pad, also in the Amegy building.

But Ion — which will be connected directly via rail to Amegy — is already set apart, boasting backing by one of Houston’s top higher education institutions. Targeting young talent, especially in the STEM (science, technology, engineering and mathematics) fields, the facility, slated to open later this year, will provide resources, educational programs, corporate partnership opportunities and physical workspaces for emerging startup businesses.

The land and physical structure of the Sears building have in fact long belonged to the university’s endowment, so when the lease was finally up a few years ago, the school quietly decided to partner with the city government on revitalizing the area. It was right after the economic setbacks of Hurricane Harvey and a failed bid to secure Amazon’s second global headquarters, so leaders at both the city and Rice saw the development of an innovation district, with the Ion at its center, as a powerful way to maintain and further promote Houston’s influence and viability on the world economic stage. The concept and partnership is sparking a larger conversation about the role of higher-ed in the community as a whole.

“The mayor roped me in early on,” executive director and CEO of the Ion, Gabriella Rowe, explains. “He said that innovation has to look like Houston, and be accessible to all Houstonians. We are the most diverse city in the United States. How do we make sure that the innovation economy here in Houston is one that is actually reflective of our community and provides opportunities for all our city?”

At top: inside the shuttered department store; a rendering of Rice’s forthcoming Ion

Rowe, who hails from New York and has a diverse resume with experience both in finance and educational institution management, has witnessed the big boom of tech powerhouses like Boston and Silicon Valley, but notes how they are vastly controlled and dominated by white males. She thinks Houston can change that, and believes it’s all about access. She’s working not only with Rice, but with the University of Houston, UH Downtown, Texas Southern, the University of St. Thomas, and other higher learning institutions to create collaborative programing that will connect educators, entrepreneurs, industry experts, startups and venture capitalists. “It will be all about providing theses startups with a runway to grow and foster cross pollination,” she says.

The first phase of the project has already broken ground, adding two stories to the historic Sears building, creating an impressive total of 3 million square feet of activation space. The Ion will feature an open space for large events, classrooms for educational programming, a robotics lab, a prototyping lab, a cafe, conference rooms, and, of course, individual office spaces at fixed lease rates for startups of varying sizes. “Think of it as the Ritz Carlton of co-working spaces,” Rowe says, laughing. “We want to solve big problems, like equity, access, climate change and new forms of energy. We believe that is the future of Houston.”

AT TOP: A rendering of Rice’s forthcoming Ion