In a skyscraping Upper Kirby condo, urbane décor is inspired by the owners’ love of music and multi-million-dollar high-fidelity sound. 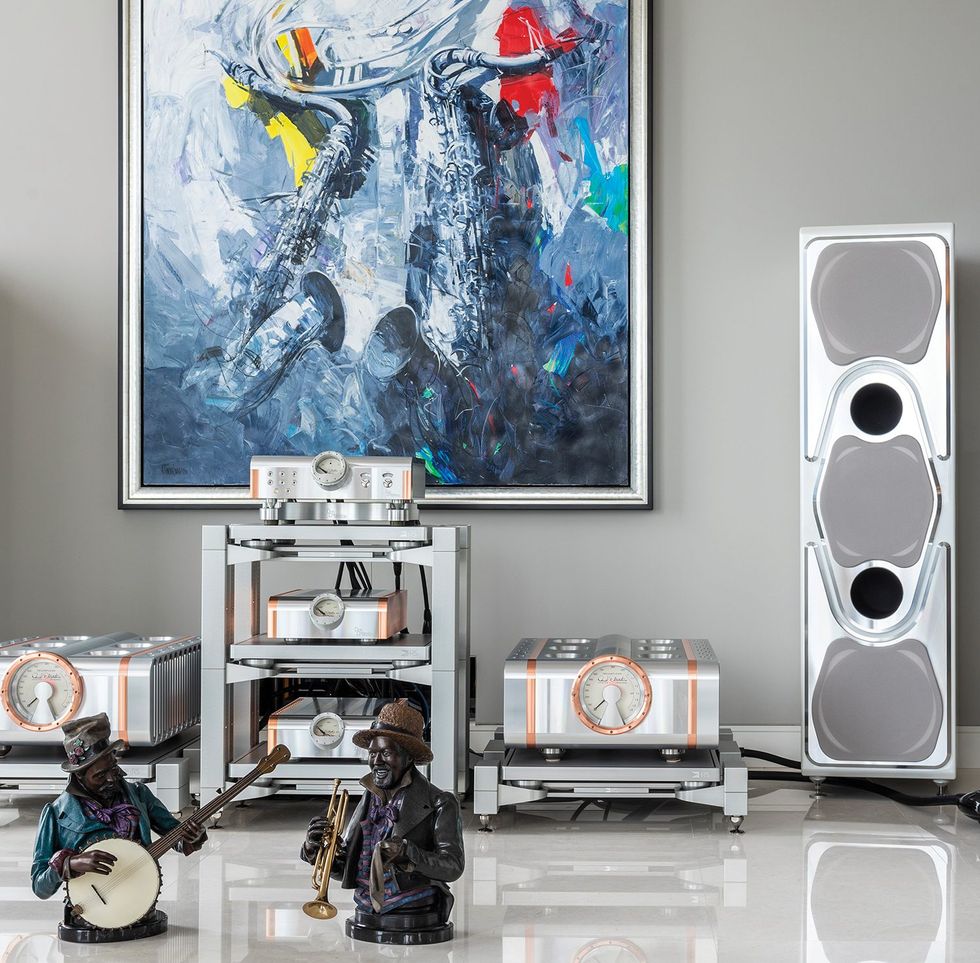 Lots of wealthy people design their homes around their enthusiasms. Cooks may have gourmet kitchens with enough shiny appliances to make master chefs green with envy, as art lovers curate museum-white walls to show off their collections. Well, what about a self-made man of means who grew up with a passion for high-fidelity sound? He’d design his Upper Kirby condo around his prized $2 million-plus stereo, of course.

A gregarious healthcare-industry honcho did exactly that last year. He turned the high-rise haven he shares with his beautiful fiancé into a hi-fi showplace whose most impressive feature — even more than the views of most of the city, and environs that recall a slick Manhattan penthouse — is the sound system in the living room. “Music,” he says, asking not to be named to maintain his privacy, “seduced my soul as a child.” His system is said to be one of the top two most expensive home stereos in the U.S., and among the top 10 in all the world.

A bronze sculpture by Richard MacDonald from the Galleria’s Off the Wall Gallery sits on the coffee table.

“He’s a purist,” says Jonathan Lynch of the Montrose-based Iconic Systems team, the purveyors of elite stereo and home entertainment systems who worked with the homeowner. Lynch likens hearing it to listening to tunes — through Jay-Z’s streaming service Tidal, the owner accesses a nearly limitless playlist including faves such as Richard Harris’ “MacArthur Park,” “Holding Back the Years” by Simply Red, and almost anything with saxophone instrumentals or a cappella vocals — in deep space. “Uncolored sound, with endless depth.”

The system is the stuff of legend for true aficionados, an assemblage of sci-fi-looking whatnots in hues of steel and copper, all customized. Most of the components are rare if not one of a kind. A pair of Wilson Audio “WAMM” Master Chronosonic speakers with subsonic subwoofers for $850,000. Various Dan D’Agostino amplifiers — and preamplifiers — totaling about $450,000. The cable bill alone — the Transparent Magnum Opus interconnect and power cables used throughout the system — ran about $350,000. Some of the less showy pieces, such as power conditioners and digital-to-analog converters, are kept in a special little room adjoining the living room that also houses a photo studio, as the homeowner is an avid photographer. (His collection of high-millimeter Nikon lenses is displayed near the living room in a built-in glass case.)

In the kitchen, exotic fish swim laps in a custom-made aquarium.

“The whole space was designed with the stereo first,” says Lynch. The heavy off-white drapes were selected for their acoustical qualities, as was the two-inch-thick fiberglass panel on the ceiling, and the “acoustically transparent” ecru fabric on the walls. “Even down to the air-conditioner vents. They have a special kind of baffle to absorb the vibrations of airflow.”

The look of the home is also crisp and modern, to match the sound quality. The marble-floored living room’s mostly linear configuration of pale taupes and creams, which features a leather “McQueen” sectional from Cantoni, is softened by an irregular-shaped high-pile shag rug; art includes an original Salvador Dalí watercolor, of elephants on stilts walking through the desert. The kitchen, with its long parallel counters of gray-and-gold-streaked white marble, has a tall, slender, built-in aquarium filled with colorful exotic fish swimming in kaleidoscopic circles; the keeping room to the side boasts an organic LED TV screen and another set of Cantoni furnishings.

Other components of the sound system live in a small room behind the wall, which also houses the photography-enthusiast owner’s photo studio.

Only the master bedroom breaks the mod mood. It’s a French fairytale, with a wide-plank, white-washed wood floor and a crystal-dripping chandelier dangling over a bed with a tufted champagne-leather headboard. In the corner, there’s a miniature canopy bed for the couple’s French poodle. The master bathroom boasts the condo’s second-fanciest built-in stereo system; in all, there are nine systems, including the living room’s multi-million showpiece.

The multi-million-dollar sound system includes speakers on the far ends of the living room and a world-class arrangement of subwoofers and amplifiers near the center.

If it seems extravagant, the owner says it’s worth it — as a reflection of his growth as person, and a reward for his success. He has found, he says, his “high-fidelity utopia.”

AT TOP: An Upper Kirby couple’s condo was designed around their home stereo, which, with a price tag of more than $2 mil, is among the world’s finest. It’s the focal point of the living room, whose other features include furnishings from Cantoni and art such as an Antonio Tamburro saxophone print from MiArt Gallery in Italy.

After Eight Years Away, Ibsen Espada’s Solo Show Is Extensive — and Evolutionary