With new work that recalls the tragic ‘beauty’ of plastic debris afloat in the ocean, young Felipe Lopez makes a splash. 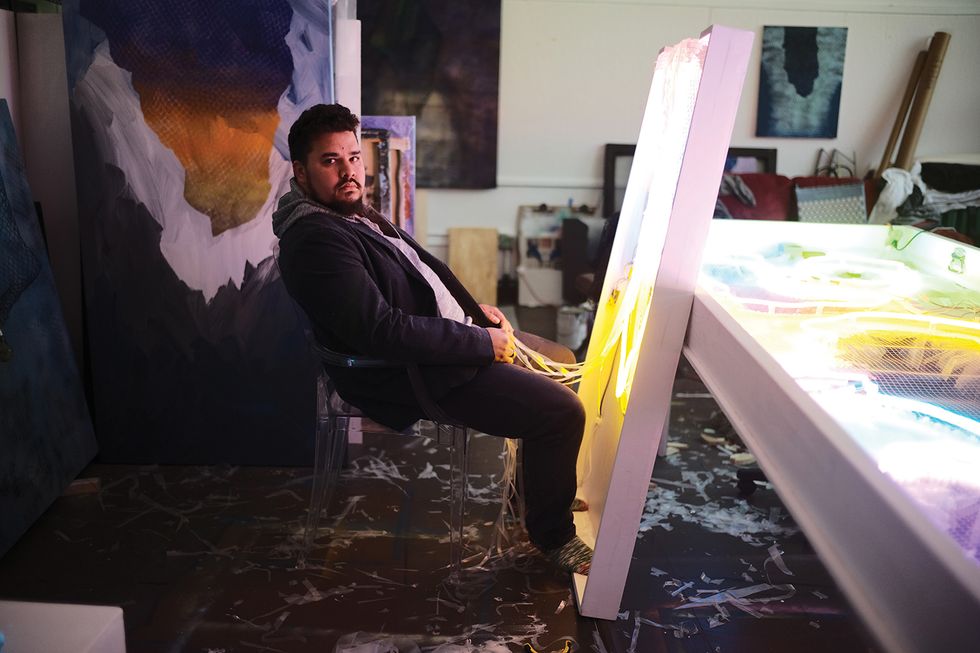 Imagine swimming in the ocean. You take a breath and dive deep. Beams of light shine down from above, but the colors are garish and unnatural, like intermittent lasers from a broken lighting rig in a decrepit disco. You swim for the surface, but before breaking through for a gulp of air, your trajectory is blocked by a shield of slimy, non-bio-degradable plastic.

Now blink. You’re actually standing in a gallery, surrounded by a black curtain, craning your neck to view Houston artist Felipe Lopez’s colorful neon, metal and plastic wrap ceiling installation “Space is the Only Noise You Can See (Sculpture),” a major work in his show Ambiente Amore, which runs through August 24 at Clarke & Associates (301 E. 11th St., 713.254.2998).

Rewind to a pleasantly warm April day. In a stuffy classroom-turned-studio at MECA, Lopez is putting the finishing touches on the installation, which was commissioned by Houston art collector Lester Marks. “I didn’t intend on the plastic being beautiful,” says the 26-year-old Bronx-born Lopez of the piece. “I have a huge respect for art that most people would find ugly. But I ... try to have the same type of dialogue with things that would be more visually appealing.”

Indeed, “Space” and the other works in his show — including hand-tied fishing lures encased in clear light bulbs, and a new series of richly hued landscape paintings, in which the colors of the aurora borealis are ensnared in fishing nets, or radiate behind thin sheets of metal — are all beautiful to behold. Yet each painting speaks to nature and its elusiveness, insofar as eyes, ears and hands are able to grasp. “Nature has its soul,” says Lopez. “We know it’s there, we know it’s visible, but we’re still being blocked.” And sometimes, that blockage is garbage humans throw into the sea.

MECA is where Lopez first developed his skills. After dropping out of school at 16, his mom enrolled him at MECA “just so if the courts called about me, she could say, ‘He’s getting his GED and attending these art courses,’” says Lopez. After two years of prodigious study under artist and educator Diana Muñiz, Lopez was showing at Wade Wilson Art. “Not having a traditional pedigree hasn’t limited me. I’ve always had a seat at the table.”

Marks, who Lopez describes as both a mentor and a friend, is showing a series of original photos at Clarke & Associates in a room separate from Ambiente Amore. Both an avid collector of and strong advocate for Houston artists, Marks has covered nearly every wall, corner and open space in his home with art. When Lopez first visited the collection, his life was changed. “I didn’t sleep for three or four days afterwards,” says Lopez. “It was the first time I realized I could create anything, and somebody who is just as crazy as me would want to live with it.”

Now happily married — he met his wife, musician-writer Meghan Hendley, at the Dallas Art Fair six years ago — and the father of three children under the age of four, Lopez’s star continues to rise, which means he has to work harder than ever. “Last year was a really big year,” says Lopez, “although I’m 10 times busier this year.” Not bad for a high school dropout whose life was changed through the power of art.

“When my parents’ neighbors are bringing them the Chronicle with photos of my light bulbs,” says Lopez, “they see this is real and tangible.”