Hurricane Harvey may have been the most equal-opportunity disaster — and the most multicultural disaster response — ever. 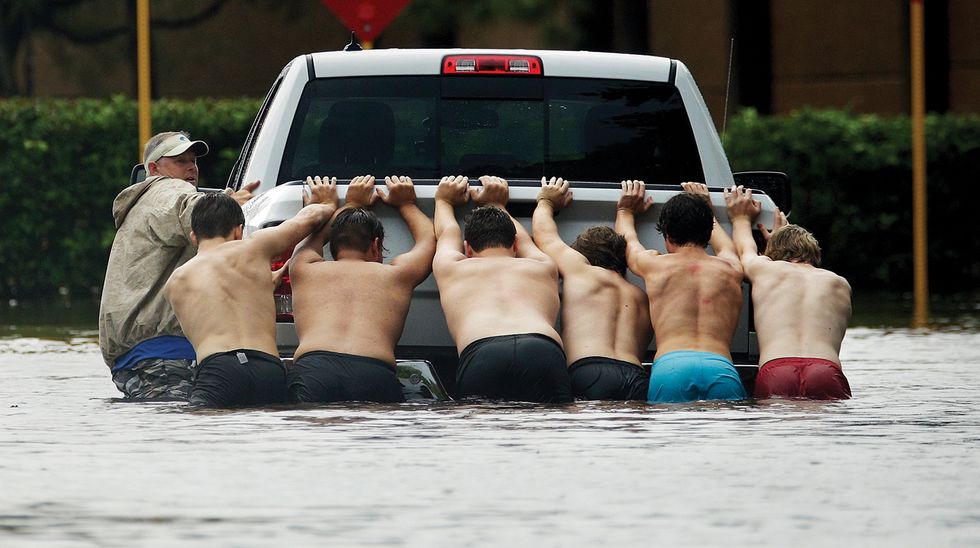 On the night of Thursday Aug. 17, someone poured white paint on a bronze bust of Martin Luther King Jr. in the predominantly African-American and economically challenged Sunnyside district. The following evening, someone poured red paint on a statue of Christopher Columbus in Montrose. These acts of vandalism, for which nobody has claimed responsibility, were surely local skirmishes in the ongoing nationwide battle over monuments and symbols from the American past.

Weather forecasts at the time were focused on the typical summer heat — 96 degrees, a warm weekend coming up. It was not until the following Wednesday, Aug. 23, that a mild weather disturbance in the Gulf was identified and named Harvey. Within 48 hours, it began raining in Houston.

That rain kicked off an epoch-making weather event, often described as Biblical, that, at least temporarily, superseded fighting over the past in favor of a fierce focus on the disastrous now.

Houstonians of all colors and creeds and economic levels suffered — in contrast to New Orleans’ Katrina, which disproportionately savaged poor blacks. From the mansions along Buffalo Bayou and the lovely golf-course homes in Cinco Ranch, to the middle-class neighborhoods of Kingwood and back to Sunnyside.

And if Harvey’s victims were a melting pot, so too were its heroes. Just ask Derrick Lewis.

Lewis is actually a New Orleans native who moved to Houston as a teenager, and he’s currently the sixth-ranked heavyweight mixed martial arts fighter in the world. At six-foot-three and with 250 pounds of trained muscle, the African-American champ earned the fighting nom de plume of “The Black Beast.”

When the flooding began, however, the Cypress resident became a different kind of champion — one of those guys with a gigantic truck who headed into the waters and began rescuing people. For days, he fielded messages from friends and acquaintances about folks in trouble. “People would call or text, and say they know someone that is trapped,” he says. “And then we’d go out and pick them up, take them to the gas station or somewhere safe.”

Lewis found himself the subject of national press coverage when he rescued an elderly white man with a prized possession he couldn’t stand to let go of: a Confederate flag. In the story, now legend, the man, escaping with just the clothes on this back and the controversial banner, apologized to the fighter and offered to ride in the back of the Chevy so as not to offend; the man’s wife wisely pointed out that, if he really didn’t want to cross the man who’d just saved his life, he should’ve left the damn thing behind to soak up floodwater. But the Black Beast couldn’t be bothered with such trivia. “Man, I don’t care about that,” he told the old guy. The rescued man, soaking wet and shivering, road shotgun.

“I’ve lived in the South all my life,” Lewis told CityBook later on. “There isn’t anything I haven’t seen. I just wanted to help him.”

And Lewis wasn’t alone in that desire. Do-gooders who came from near and far, by the thousands, were, to a man and woman, far more interested in saving lives and doing the right thing than in anyone’s skin color or taste in souvenirs. And bubbas with big boats — not the demographic group most typically associated with multiculturalism, perhaps unfairly — were everywhere, helping everyone. We saw it with our own eyes.

And some of the rescuers had smaller boats. Pearland resident Jie Wu, a research manager at Rice, can speak to that. “The Chinese community uses an app called WeChat to keep up with each other,” she says. “When the flooding started, people couldn’t get through to 911, so they started using WeChat to call for help.”

She describes how many Chinese race small watercraft, an activity Wu refers to as “dragon boat racing,” so many had boats ready to deploy. Guided by messages coming in through WeChat, they headed out looking for people in distress. “They went to Braeswood, to Meyerland,” she recalls. “They’d pick up whomever they found, regardless of race.”

Wu’s Rice colleague, Stephan Klineberg of the Kinder Institute for Urban Research, is not surprised by the egalitarian spirit of the rescuers. Klineberg, who was attending a conference in Chicago through the storm, watched the story unfold on TV. “This is the kind of disaster that really brings people together because no one is to blame,” he says. “No one can say anyone else is responsible for it.”

The man knows what he’s talking about. Since 1982, Klineberg has been administering the Houston Area Survey, which “has been measuring the continuities and changes in the attitudes, beliefs, and experiences” of Houston residents, he says. His survey has confirmed that Houston is the most ethnically and culturally diverse city in the U.S. In fact, Fort Bend County is the most diverse county in America, a place where whites, blacks, Hispanics and Asians each represent one-quarter of the population. It can be deduced, then, that a locally generated response to such a large-scale disaster, would stand to be the most diverse disaster response. Anywhere. Ever.

And it’s not just about numbers. It’s about hearts and minds. Klineberg has a bead on that, too. “We’ve had 30 years of immigrants moving to Houston, and antagonism has given way to acceptance,” he says. “The surveys show increasing shifts in attitudes towards immigrants towards an attitude of acceptance.”

Here’s the obvious truth that barely needs stating: The spontaneous reaction of untold thousands of people in Houston reveals a destiny-shaping depth of character that speaks well of the city. The crisis did not reveal simmering hatred that only needed a crisis in order to catalyze rage. In fact, it revealed the opposite: a simmering love for each other.

It makes you feel a bit foolish to ask, what were we fighting about back in mid-August? Seems rather a minor matter now, and Klineberg would probably agree. “With statues, you can celebrate them or be appalled by what they stand for, but a natural disaster draws on a common human experience,” he says. “In this kind of disaster, everyone is equally vulnerable, and it’s happening at one time.

“There was real danger, and everyone knew it.”

Avant-Garde Dance Troupe Goes Out on a Limb at Archway