The
Magazine
The
Podcast
Made in Houston

The dudes of Rootlab turned their passion for digitally aided designs into a buzzy biz. 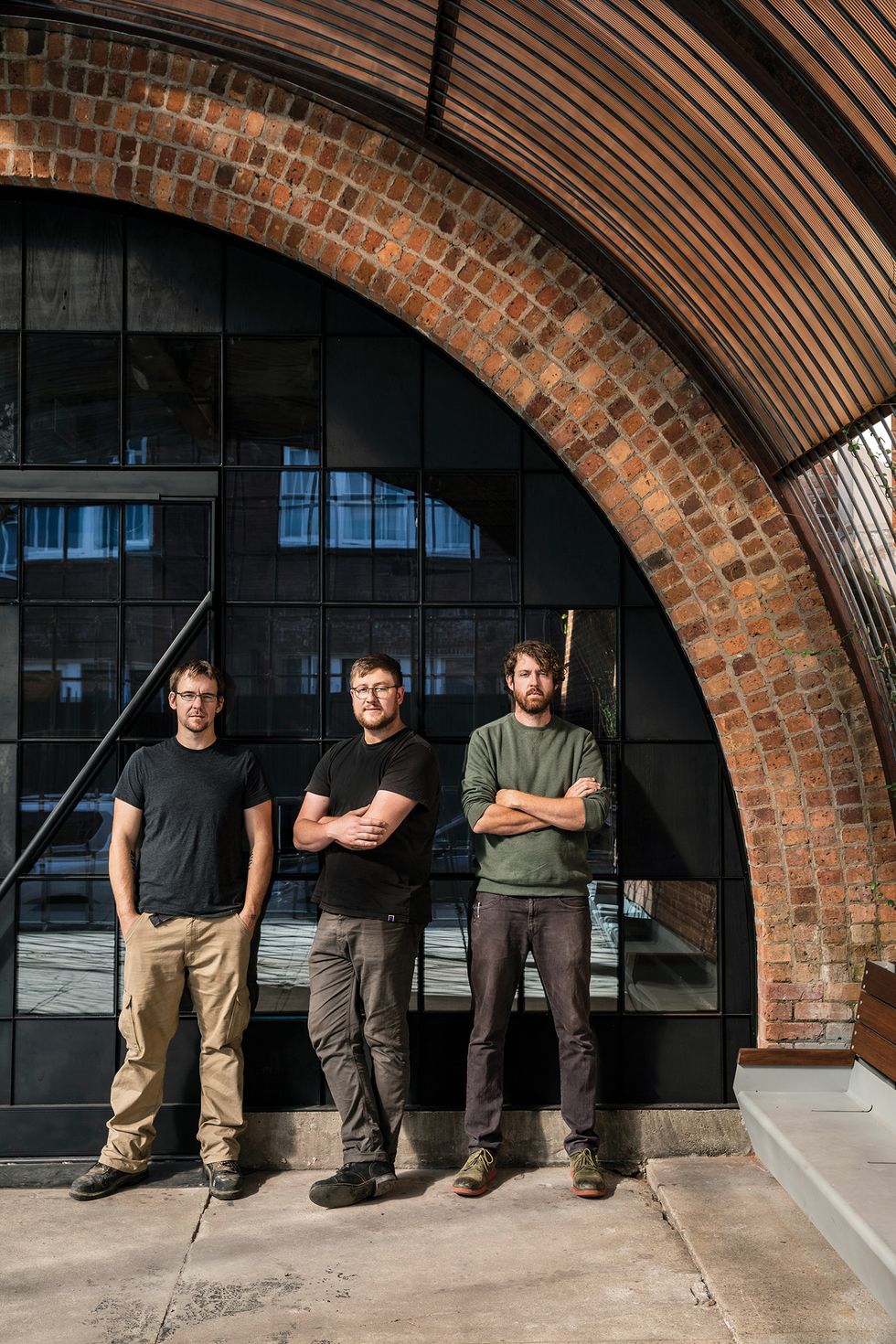 A large warehouse sits in the East End. Green city garbage cans rest against a plain beige exterior wall, and a few vehicles are parked outside along the street. One of many in the area, this warehouse has nothing that makes it stand out more than others — from the outside, that is. But inside, Rootlab, a design group creating custom architectural elements and furniture for both commercial and residential spaces, is hard at work making eclectic pieces literally built to stand out.

In recent months, the Rootlab team — comprised of 13 creatives and helmed by principal designers Logan Sebastian Beck, Eric Hester and Troy Stanley — has smithed the eye-catching sleek bar at Penny Quarter, the statement-making spiral staircase at Montrose Wine and Cheese, and the recently refurbished coffee bar at Catalina Coffee. They also designed and opened their own coffeeshop, Giant Leap, not far from their East End HQ.

In the back of Rootlab’s open warehouse — filled with high-tech machinery, shelves holding countless tools and chunks of wood, and pieces of metal waiting to be welded into works of art — is a cozy shared office space. Beck, the unofficial spokesman for the group, kicks his feet up, telling how it all happened. “Eric and I both went to Rice and then were freelance photographers together,” begins Beck, who, not unlike his counterparts, has a hipster edge to him, sporting framed glasses, worn jeans cuffed at the bottom, and tousled hair. In his spare time, Beck enjoyed building furniture, while Hester worked in construction, building $1-million-plus homes. It didn’t take long for them to realize that their sets of skills could be combined to achieve something greater.

Meanwhile, artist Troy Stanley was designing a sculpture for Burning Man 2012 using a CNC machine, a coveted tool that removes material to create shapes. “We heard about what he was doing through word of mouth, and we went [to Nevada’s Black Rock Desert] to collaborate with him,” says Beck of their first encounter. “We pushed ourselves to our limits. It was good for us to all see each other in an intense situation. I realized they were some of the most capable people I’d ever met.”

Back in Houston, the threesome formed Rootlab and began to collaborate on furniture projects and custom signage for businesses. In 2016, they landed their first big commercial client, Jenni’s Noodle House, and their portfolio expanded exponentially in the years that followed. Their custom furniture — including the team’s all-time favorite design, an undulating, parametrically designed lounge chair carved out of a steam-bent walnut bench — and unique architectural elements can be seen in high-end residential properties and in some of Houston’s hottest restaurants and coffeeshops. But it isn’t always easy turning over their labors of love to their rightful new owners. “It’s hard to give away the thing you bled over. That’s the challenging part for me,” says Beck.

So in 2018, the Rootlab guys opened Giant Leap Coffee in the East End, filling it with their eclectic pieces — ones that the designers can enjoy day in and day out. Plans are underway to open a second location of the space-themed spot in Uptown Park in 2020; the trio will also move their existing shop to a bigger space in the forthcoming mixed-use development, The Plant, also in the East End. They’ve organized a NextSeed capital raise for both projects.

Says Beck, “Giant Leap is the result of us owning something.”

AT TOP: Troy Stanley, Logan Beck and Eric Hester at Ronin Art House, for which they built the arch, window and door, near Downtown.

Valentine's Day Spa Gifts for a Partner — or Yourself