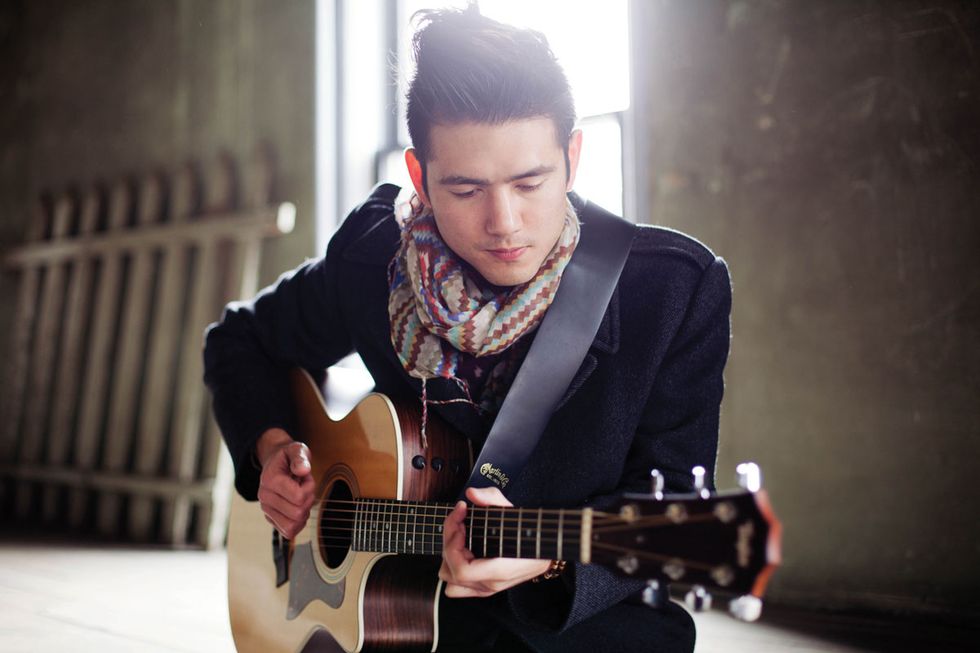 Despite being the son of two artists and the winner of a NPR songwriting award and a BMI John Lennon scholarship, singer-songwriter Aaron Kaufman worked briefly as an analyst for Target in Minnesota after graduating from Carleton College. And at another point he was “determined” to find a teaching job in China, but a Houston nonprofit had other plans for the self-taught guitarist, whose voice has been compared to Justin Timberlake’s and who cites influences from Bon Iver to ’90s R&B.

“My mom read a New York Times article about a nonprofit down here called Purple Songs Can Fly,” he remembers. The Connecticut native applied for an internship and ventured southward in 2008 to take the unpaid summer gig, which involved writing and recording songs with young patients (and their siblings) at Texas Children’s and sending them home with a CD at the end of their hospital visit.

When he returned to Minnesota, he missed the work. Serendipitously, Purple Songs Can Fly asked Kaufman back to Houston. One thing led to another, and he connected with Music Doing Good, a nonprofit that provides music education outside of school settings. The 6-year-old org named him media producer in 2012.

Kaufman wears a lot of hats, from working with the marketing team to audio-visual work. “Nonprofit wasn’t necessarily what I thought I’d be doing, but it’s very powerful and rewarding to bring music opportunities to at-risk students in Houston schools,” he says.

In addition to doling out funds — 74 scholarships last year alone — and placing instruments in the hands of students who need them, Music Doing Good conducts ongoing outreach. One such effort is a year-long program in which kids from underserved neighborhoods study one genre of music and put on a musical at year’s end. “They help write the show and work with musicians, then they perform at the Hobby Center,” says Kaufman. “Kids who have no choir in school are standing on a premiere stage, and they pack the house!” Kaufman himself works in the studio, helping kids record songs and preparing for a bi-annual benefit concert to raise funds for the program.

And it’s not just about preparing kids for possible music careers, as many won’t choose that path. It goes deeper, and impacts all students. “Music education is essential to their thinking,” he says.

When he’s not collaborating with co-workers and students, the yogi is writing and pitching songs in Nashville, Los Angeles and New York. “I’m finishing up songs and mastering them at Sugar Hill Studios,” he says.

He plays about 40 shows a year, including private house concerts and the occasional yoga class. “My music has a flow to it that fits very well with yoga,” he says. “Intimate shows — just me and my acoustic guitar — are my favorite thing, like playing in patients’ hospital rooms. I don’t play an 8-year-old’s favorite music, but it helps develop a sense of intimacy and quiet.”