In two must-see shows, acclaimed artist Francesca Fuchs finds both dreamlike joy and pointed pain in ordinary objects from her past. 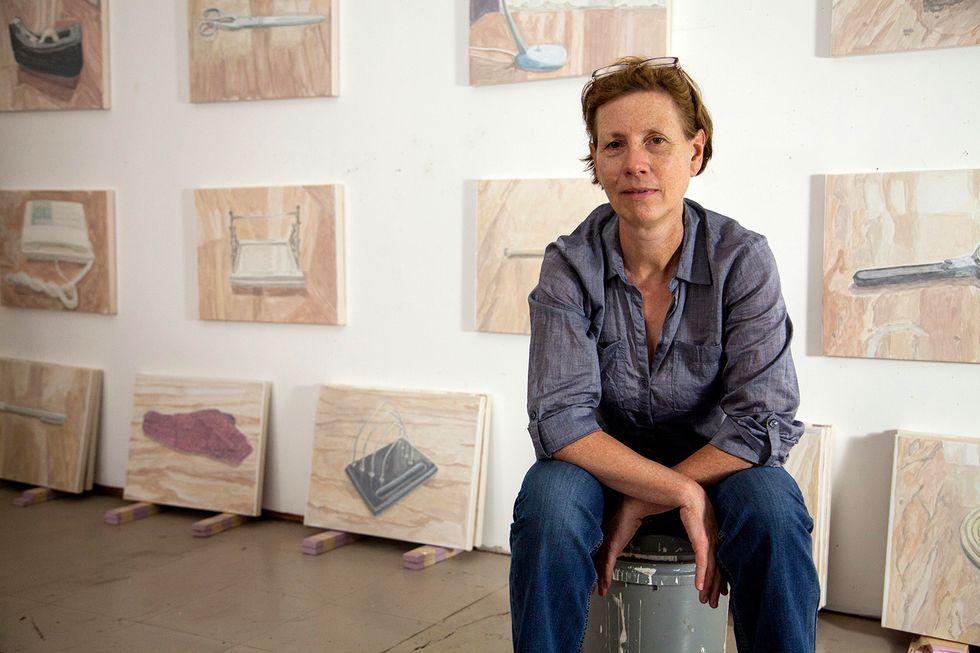 What is the color of memory? Is it a blend of blurry, primary hues, as if seen through a lens smeared with Vaseline? Or does it come to us in vintage black-and-white, like a scene from a silent movie?

“Memory is very much involved in my work,” says 2018 Texas Artist of the Year Francesca Fuchs, who uses color to imbue the everyday “domestic” objects she chooses to paint — a telephone, a Christmas tree, another artist’s painting — with an almost supernatural aura, and a history that is elusive, like a dream you can’t quite completely remember.

“There is a place where it can tip over into sentimentality,” says Fuchs of her process. “I do want you, the viewer, to feel this kind of tenderness, but I don’t want you to give in to it!”

Born in London, Fuchs grew up in Tübingen and Münster, Germany, and initially trained as a sculptor. Shortly after arriving in Houston in 1996 for a two-year Core residency at the Glassell School of Art, she met and fell in love with former Core artist-in-residence Bill Davenport, and has remained in the city ever since. (They have been married for 19 years and have two teenage boys.) Fuchs continues to inspire and influence new generations of artists, both as a critically acclaimed painter, who has shown in galleries and museums across Texas for more than two decades, and as head of the painting department at Glassell, a position she has held since 2006. In September, she presents two shows of new paintings: Something at Art League of Houston (Sept. 7-Nov. 3) and How to Tell the Truth and Painting at Inman Gallery (Sept. 14-Oct. 27).

Located in the same 11th Street building in the Heights as Bill’s Junk — her husband’s quirky thrift and consignment store — Fuchs’ compact but light-filled studio is where she plans out her shows, much like a sculptor. “Their long wall is exactly the same length as my studio wall,” says Fuchs, leaning over a dollhouse-size model of Inman Gallery she has constructed, complete with two rows of tiny horizontals standing in for her paintings. “I think of my paintings in terms of installations. That’s why I build models to see how they are going to be situated in the space, and what they create together.”

The Inman show is a collection of more than a dozen paintings of objects discovered in a desk that belonged to her father, who died in 2016 at age 88, surrounded by family at his home in Oxford. (“It was all as good as death can be,” says Fuchs.) In the paintings, each object — scissors, a tape dispenser, a desk lamp — hovers above a swirling surface of brown shades and streaks of light, colors painstakingly mixed by Fuchs and applied to the canvas sparingly, in just three or four layers. The resulting images seem to materialize and vanish before your eyes.

Meanwhile, for Art League of Houston, Fuchs has painted a series of childhood knick-knacks her parents couldn’t bring themselves to throw out. “They are, in a strange way, more tangibly real than a photograph of the child,” says Fuchs, who “pumped up” the value range of her colors to bring these misfit toys to life.

As the title of Texas Artist of the Year settles in, Fuchs is honored to present two significant shows at the same time, one meditative and somber, the other humorous and heartbreaking. It will be up to the beholder to decide what is it he is seeing and feeling. “Each show creates its own world,” says Fuchs, “but they are both part of the same larger conversation.”

‘I Will Not Die,’ Vows Former CityBook Coverguy Who Survived Vicious Nine-Time Shooting