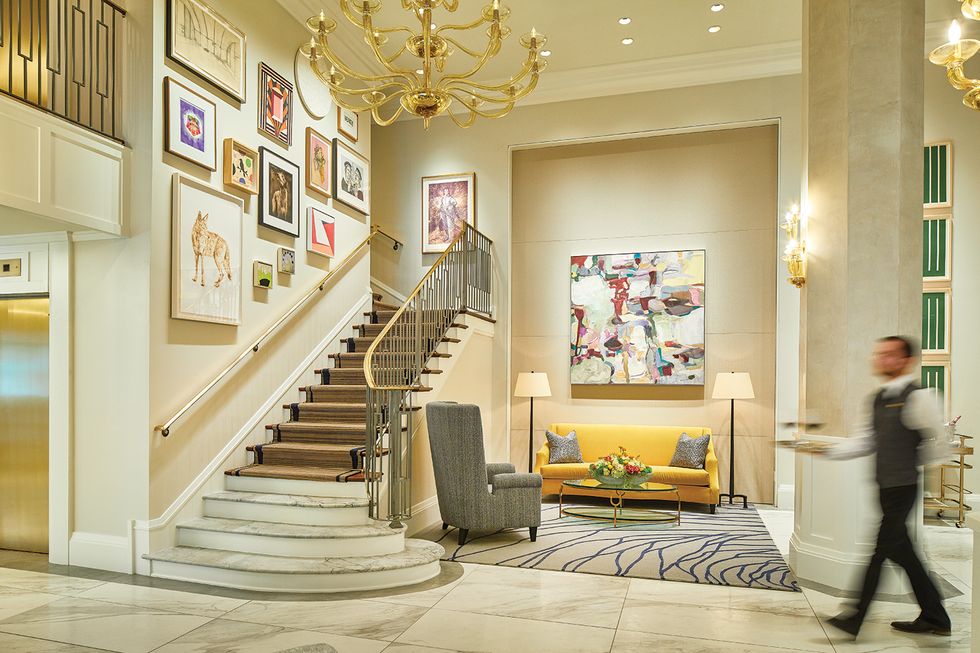 Throughout the decades, renovations to Houston's Lancaster Hotel, still standing in its original 1926 location at 701 Texas, arguably made little or no effort to connect back to its historical origins. And several misguided design decisions prevented the hotel from providing guests and travelers with a respite that feels like home. But in the wake of Hurricane Harvey, which completely flooded the Lancaster's basement, and filled the first floor with two feet of water, the slate was wiped clean, and Dallas-based interior designer David Cadwallader and Lancaster principal partner Jay Shinn, also of Dallas, recognized the opportunity to try something new.

“The first time I actually went to the hotel was three days after the flood," says Cadwallader. “It was a total disaster ... almost overwhelming." Just one month after purchasing the Lancaster, Shinn was suddenly facing the seemingly impossible task of repairing, and reopening to the public, a beloved Texas historical landmark. “We started formulating the scope it would take," says Cadwallader, who had already talked to Shinn about a redesign of the hotel's public areas before Harvey.

It was also decided the renovation of the Lancaster's interior would include art. Lots of art. More than 200 paintings, drawings, sculptures and prints by Texas artists, all from Shinn's personal collection, are displayed throughout the hotel.

Shinn caught the collecting bug early: At age 10, he was trading masterpieces with other students in his art classes. And being a visual artist himself, Shinn relished the opportunity contribute to the “cultural mecca" of Downtown's Theater District, and exhibit art from his collection in a context other than gallery or museum spaces. “An unexpected encounter with art can conjure new meanings," Shinn says.

‘I Love Celebrities’ and ‘Big Top,’ both by Michael Miller, hang on the tenth floor

The first thing guests (unexpectedly) encounter upon entering the hotel is an 84-by-27-inch photograph, commissioned from the duo Manual, of the spines of two volumes of Jean de La Fontaine's anthology of racy 17th-century short stories Contes et Nouvelles. Hung between the hotel's two lobby elevators, the photograph has all the power of a Dutch still-life, captured in high definition. To the immediate left, next to the front reception desk, hangs Houston-born Mark Flood's intricate lace-and-paint collage "Outcrop," also perhaps a surprising choice for what Cadwallader describes as the lobby's "ambiance of warmth," given Flood's reputation as the reigning enfant terrible of the art world.

The renovated lobby and its abundance of natural light, thanks to the large new divided-light windows facing Texas and Louisiana streets, sets the tone for all 12 floors of the Lancaster's interior. Suspended above a new floor of gray and white Italian porcelain tile, between the original support columns which extend all the way to the top of the building, hangs a Murano gold-and-silver-glass chandelier, complementing a small, steel maquette by Texas-born sculptor James Surls, appropriately titled "Stairway to Heaven."

On the wall to your left as you climb the stairs from the lobby to the mezzanine are more works from Shinn's collection, including Julie Speed's etching "Rope Burn," in which two butch sailors in vintage dress fumble with a dangling (or is it ascending?) knotted rope, referring perhaps to how challenging collaboration can be. "Jay was very astute in putting the collection together," says Cadwallader. "We thought about that all along the way, how to balance the placement of the art with the decor."

The completely renovated mezzanine now feels much more spacious and open, and operates as a second breakfast and dining area above the first floor's Cultivated F+B bistro and walk-up espresso bar. Heavy beams and fur downs that made the pre-Harvey bistro feel closed in were removed, and ribbed gold-glass walls and cool-to-the-touch zinc bartops, reminiscent of the hotel's jazz-age provenance, were installed.

All of the mezzanine's walls were torn down, and some of its windows uncovered to allow for more natural light and provide guests with a view of the Alley Theatre next door. And while guests can enjoy their favorite programs on the lounge area's 75-inch television, they are more likely to explore the mezzanine as if they were visiting a contemporary art museum, albeit one with carpeted floors.

Throughout the hotel, Cadwallader's neutral palette continues to bring the eye's attention back to the art, such as Margo Sawyer's geometric jigsaw wall sculpture "Synchronicity of Color," which hangs in the mezzanine's lobby above a cream-colored custom banquette.

In the nearby hallway are a group of four wild lithographs by celebrated Chicano artist Luis Jiménez titled “Progress Suite," which depict the evolution of transportation, and caricatures of some very Texan travelers, including a terrified woman on a bucking stage coach about to burst out of her décolletage. (Sharp viewers will see the word “progress" is spelled out in the clouds above each traveler.) Guests are greeted at the mezzanine elevators by Robert Rauschenberg's cool yet colorful assemblage of silk-screened fabrics, “Samarkand Stitches #VII."

Meanwhile, each of the hotel's 84 rooms and nine suites were completely redesigned with new furnishings, upholstery, carpeting, drapes, headboards and mattresses. No two rooms are alike, though each retain elements of the hotel's original classic design, such as brass faucets and marble counters in the bathrooms, and feature two or three works from Shinn's collection.

Since its reopening on Oct. 15, in the press and on social media, locals and tourists alike are singing the praises of the Lancaster, and a carefully executed design that honors the hotel's history, while transcending the fads and trends of today's industry. This is a hotel ready for the next 100 years. “It took a dedicated, working 'village' to accomplish this in one year," says Shinn. “We had an outstanding team with great experience who made the project come together gracefully. It feels wonderful. Like we created something special."