City in the Sky

With his trusty drones, a cool pseudonym and a passion for discovery, photographer ‘Tommy Tenzo’ is taking Houston cityscapes to new heights. 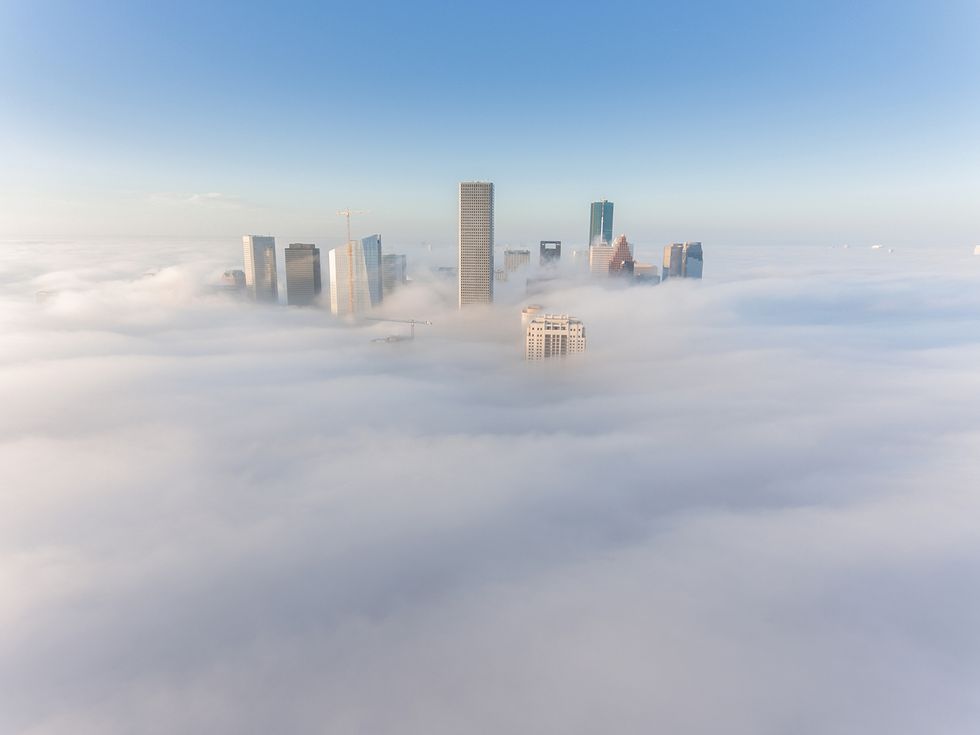 Tenzo had this image in mind for months before he captured it. “I had never seen Downtown photographed with low fog in the morning,” he says. “I kept track of the weather for months and asked meteorologists questions. Then I simply waited. One morning I could see fog out of my window. I jumped out of bed and knew this was going to be my chance. It came out exactly as I imagined it.”

The beauty and mystery of flight has piqued the curiosity of man for thousands of years. Partly because, from an aerial view, the natural wonders of the earth below become something entirely new — a vast work of art. For a photographer like Houston’s Tommy Orellana, this fascination led to a pursuit of drone photography. “I am inspired by my need to create, challenge perspectives and learn about the world,” says Orellana. “But I’m a highly visual person, and I learn by experimenting. Each photo is a summary of my interests, ideas and experiments.”

Shooting as Tommy Tenzo, Orellana is a rising star among Houston artists. The pseudonym, which derives from something far from photography, hints at other hidden talents. “Twelve years ago, I built a small drag car in my garage. When I finished, it ran a quarter mile at 10.4 seconds at 145 mph,” he says. The nickname “Tommy Ten” soon caught on among friends, and one buddy called him Tenzo.

Drone photography began as a hobby for the 34-year old bachelor just last year, as he found himself less than enthused with his 9-to-5 in the media industry. “I felt like I had a lot to offer, and was unable to exercise that need at my job,” he says. “I tried to look at the situation from an outsider’s perspective, and told myself, ‘If you think you’re so great, stop talking about it and just do it.’”

Until that time, the Dallas native, an avid traveler, used only his cell phone to snap pics of places he’d been. But in 2016, he dusted off his Nikon DSLR — purchased in 2009, when a previous photography bug bit him — and bought a camera drone, taking both with him everywhere he went. It was a fruitful decision, and, this time, one he fully committed to. He studied the basic principles of photography, and taught himself photo editing, social media management and the foundations of building his website, tommytenzo.com. “I tried to read books, and I took a photography class in college,” Orellana says. But the takeaway was lacking: “I learned more by doing.”

He began using social media as a platform to get feedback on his work. “I noticed that even though I had an expensive handheld lens and camera, most people seemed to like the drone images better than the ground-based.” Over the past few months,

@tommytenzo on Instagram has grown to 2,000 followers, featuring stunning photography of local landmarks shot from the sky. A landscape architecture firm recently licensed all of the photos he took of the McGovern Centennial Gardens, one of which was named one of Houston’s best photos of 2016 by Thrillist. “I just didn’t think I was on that level,” admits Orellana, who received calls soon after from art galleries in New York and corporations looking to license photos. “I realized I was on to something with the drone photography, so I kept going.”

With a focus on this surprising new perspective, Orellana continued to shoot — “everywhere.” The Heights resident says, “I’m always paying attention to everything around me. Whether I’m in a car or plane, I make mental markers and eventually make my way to that specific location and do my thing.”

And “doing his thing” is no easy task. Orellana says it can prove challenging to know exactly where the drone is flying in relation to what he’s shooting. Without the option to zoom in or out, he must navigate the machine from the ground, using GPS on his phone, to get the shot he desires. “I think there is a misconception that the higher up, the better,” he says. Captured mostly at altitudes around 400 feet, his photos offer a sense of intrigue while remaining simple enough to dissect with the naked eye.

Even the best aerial photographers will share a tale of a flight gone wrong. For Orellana, it was during a visit to Costa Rica. “I had recently purchased a drone with all of the bells and whistles,” he recalls. Within two hours of landing in the beachfront city of Playa Hermosa, he lost his brand new toy in the ocean. “I navigated too far, and it didn’t have enough battery power to make it back.” Despite the costly loss — drones of the sort Orellana uses can run upwards of $2,000 — he made the best of his trip by capturing shots from his trusty Nikon. “I pushed myself to move on and remembered to be grateful that I was traveling in the first place.”

Today he uses a DJI Phantom 4 Pro and a DJI Mavic Pro, and has passed the FAA exam to become licensed to fly for pay, meaning he can legally sell his photos. With a number of prints on display locally — Boomtown Coffee showcased his work this spring — Orellana says it can get expensive to print large photographs, and he wants to continue perfecting his craft before becoming consumed with selling. “I would like to be involved with more galleries, but I also want to create quality work.”

Despite his desire to take things slow, his star is rising. A 10-by-13-foot print of Orellana’s photo of the Houston skyline magically peeking out of the fog was recently purchased by the Hines mega-development firm — his biggest client to date — for its new Downtown building.

Perhaps even the sky is not the limit for Orellana, who looks forward to the possibility of publishing an architecture book. “I never got to travel as a kid, and my dream has always been to explore the world. I’ll continue to pursue that,” he says. “Documenting those experiences with a drone is just the cherry on top.” ν