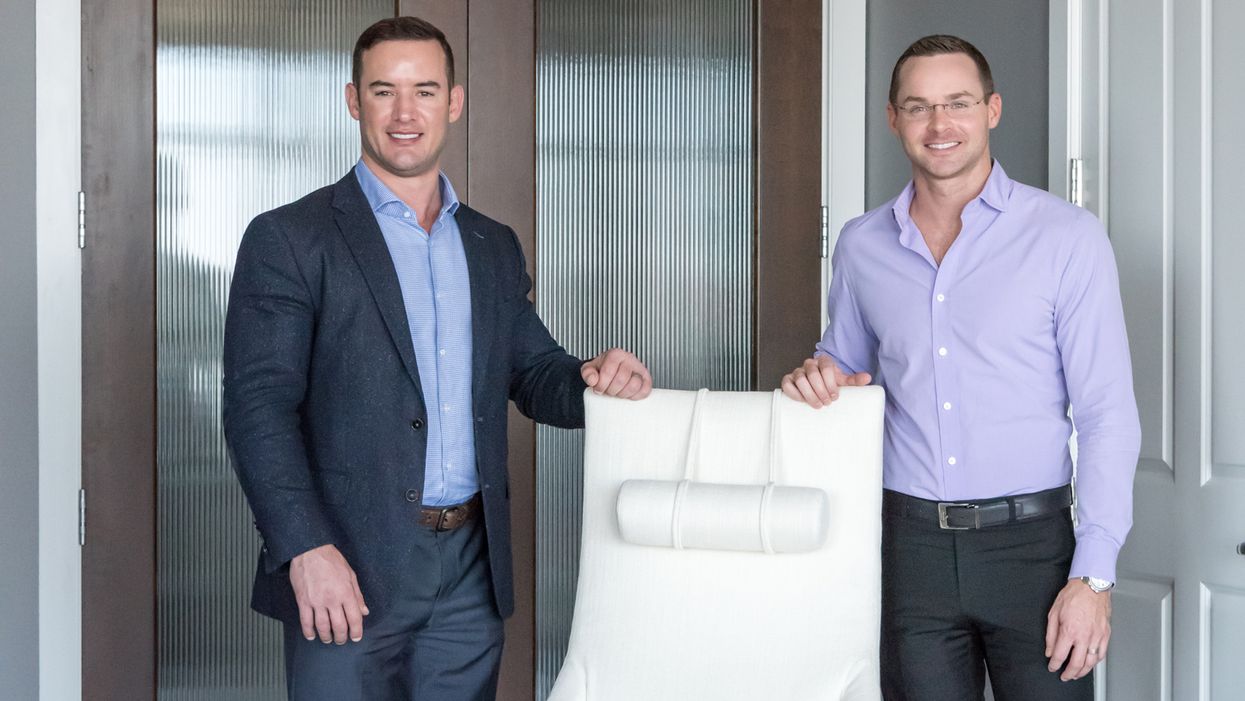 It's been a busy month for real estate developer and rising mogul Jacob Sudhoff of Douglas Elliman Texas and his architect-designer husband and business partner Jerry Hooker of the Mirador Group. They learned that the baby they're expecting to join daughter Brinley, nearly 2, is a boy; the video of the couple cutting into the blue-layered gender-reveal cake on Instagram is hash-tag-adorable.

And they have announced the “official" opening of their long-in-the-making Giorgetti luxury condo building in Upper Kirby.

Details in the Giorgetti lobby

Beautiful projects that take a minute are par for the course for the handsome, athletic pair, their stylish clothing as carefully fitted to their frames as the inlaid wooden ceiling panels in a diamond pattern on the ceiling and walls of the new building's lobby. After all, they also won considerable praise in design circles for their complete restoration of the old C.L. Neuhaus mansion at 6 Courtlandt Place in old Montrose. The Chronicle gushed that, over a two-year painstaking process, it was made “better than when it was finished in 1909."

For its part, the Giorgetti, a unique partnership with the 133-year-old fine Italian furniture and cabinetry maker of the same name, has been a full five years in the making. Houston CityBook has covered the evolution of the project since its inception.

The patio of the model unit

The young developers wax proud on the unprecedented nature of the partnership with Giorgetti, which also informed the opening of their European-furniture store CASA in the mixed-use setup formerly known as West Ave a couple years back. “The building is representative of the Giorgetti Italian lifestyle — a harmonious fusion of innovative design, architecture, form and function that truly distinguishes the pioneering brand," says Hooker, who first fell in love with the brand when he purchased a handmade wooden Giorgetti chair he found to be of exquisite workmanship.

Sudhoff goes even further: “Everything from the building's location to its fixtures and finishes within have been inspired by the brand, enabling us to create a unique, refined setting. Each residence is like an original work of art."

The kitchen of the model unit

A common area at the Giorgetti

What might be even more notable than the chic European design heritage of the place is its insistence on functioning like a real home for its residents, some of whom have their own private garages within the larger parking garage, just steps from their front doors, for example. Units are also outfitted with generous outdoor spaces, some of which could accommodate the addition of private pools and come with outdoor kitchens and fireplaces. A community spa and dog park are being completed now.

H.E.B. is developing a new walkable shop and café concept in the empty lot next door, beyond the row of century-old oaks that frame the Giorgetti. Some 16 of the seven-story mid-rise building's 32 units are already spoken for. The rest range in price from $1.9 million to $4.3 million.