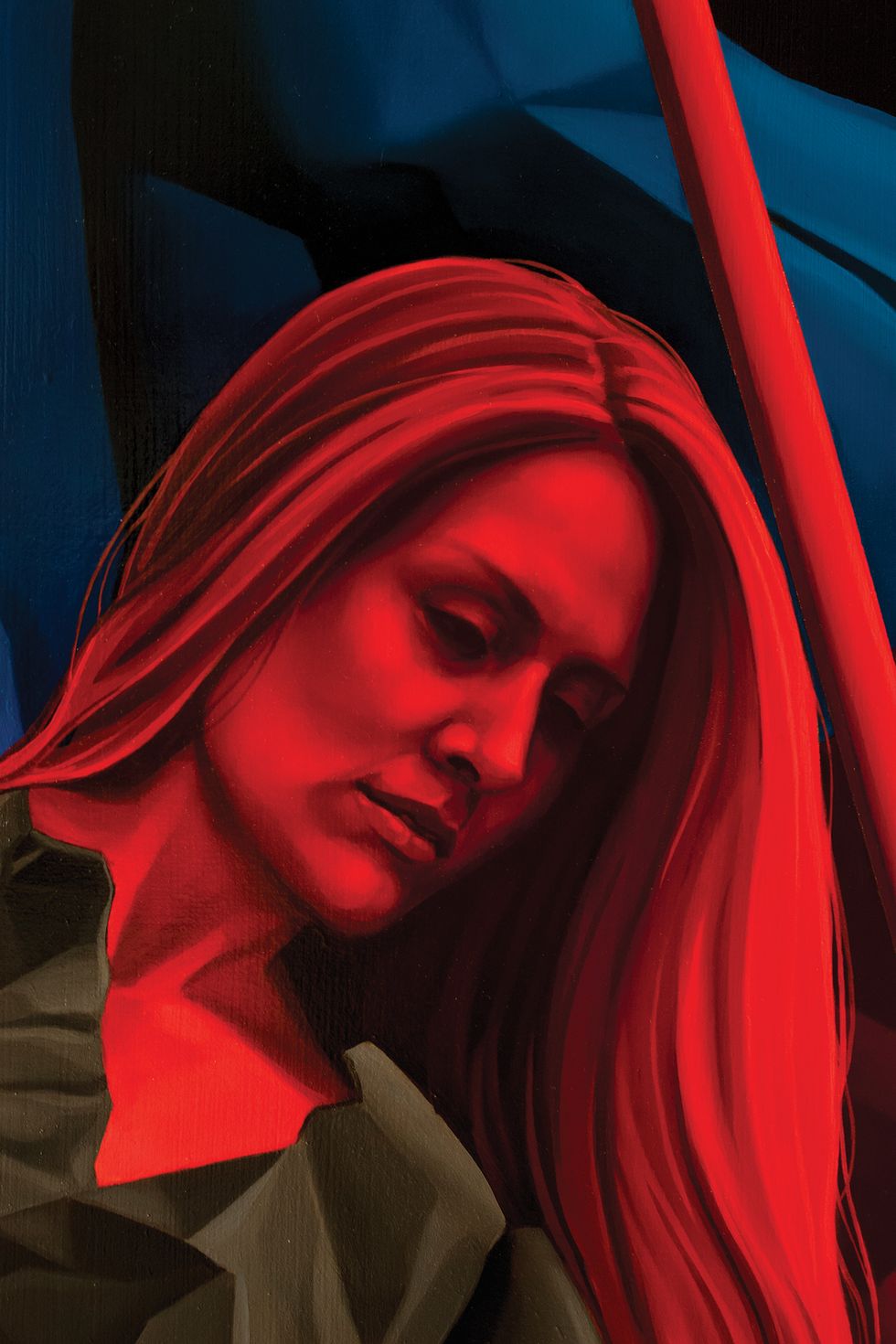 In the Book of Revelation, Saint Michael the Archangel leads the forces of God in a battle against evil, and singlehandedly slays “the dragon” Satan. Houston artist Shayne Murphy reimagines this Biblical showdown in his show Ignis Fatuus, on view at Anya Tish Gallery Nov. 16-Dec. 15, in all of its phantasmagoric horror — but with a contemporary twist: A handsome, blonde haired woman stands in for Saint Michael, poised to plunge a long spear into the dragon modeled by Murphy’s lovely wife Casey, whose limp, bat-like wings and outstretched fingertips signify defeat, and a plea for forgiveness. But why is Ms. Saint Michael wearing a pair of lace-up sneakers?

“I wanted to inject something to counter balance these very heavy themes of good and evil,” says the 37-year-old Murphy, who was raised Catholic, but except for major holidays, rarely attended mass. Several paintings in Ignis Fatuus (which means “foolish fire” in Latin) began with photographs of Casey and their friend Anne Simpson, who were tasked to pose as saints and devils found in Judeo-Christian mythology as portrayed by artists of the Renaissance and Baroque eras. “The sneakers were in the photograph I took,” explains Murphy. “And I thought, just leave it. Who cares? It’s 2018.”

Meanwhile, Murphy’s oil-and-graphite “Drop (Ecstasy of Saint Teresa)” is a trippy take on Bernini’s orgasmic white-marble sculpture, with Casey coolly embodying the object of Saint Teresa’s desire, buoyed by black and purple fluffy clouds. A few toothy, faceless grins straight out of Neil Gaiman’s graphic novel Sandman are thrown in for good measure. “Something supernatural is happening,” says Murphy of the scenario in “Drop.” “But is it imagined, or is it real?”

As in all of his paintings, colors and images are pared down to just the essentials. “I think that’s something I picked up from my years as a graphic designer,” says Murphy, “how to cut through the visual clutter.” Standing in contrast to the show’s colorful, figurative paintings are Murphy’s beautifully rendered “old-school” charcoal drawings, including “Leviathan Surfacing,” in which the sea monster in question remains below the water’s surface, while plumes of ocean spray herald its imminent arrival.

With his second solo show of paintings and drawings now complete, Murphy’s next project will be illustrating a children’s book, written by Casey, about a school-age girl who discovers she can magically travel to the worlds described in her favorite books. He laughs when it’s suggested the story isn’t so far removed from that of Saint Teresa, or the battles between good and evil depicted in Ignis Fatuus. And while Murphy prefers to describe himself as a “spiritual” as opposed to “religious,” he acknowledges the significance religious art has had on his evolution as an artist, and as a human being.

“With this body of work, I’m definitely not trying to proselytize or diminish anyone’s relationship to their faith,” says Murphy. “It’s more about the stories that carry on all throughout our history in some shape or form, and revisiting the things that got me interested in drawing and painting.”