Gracing the cover of the Art Issue in a bold new painting, Cruz and O’Rourke make their “closing arguments.” 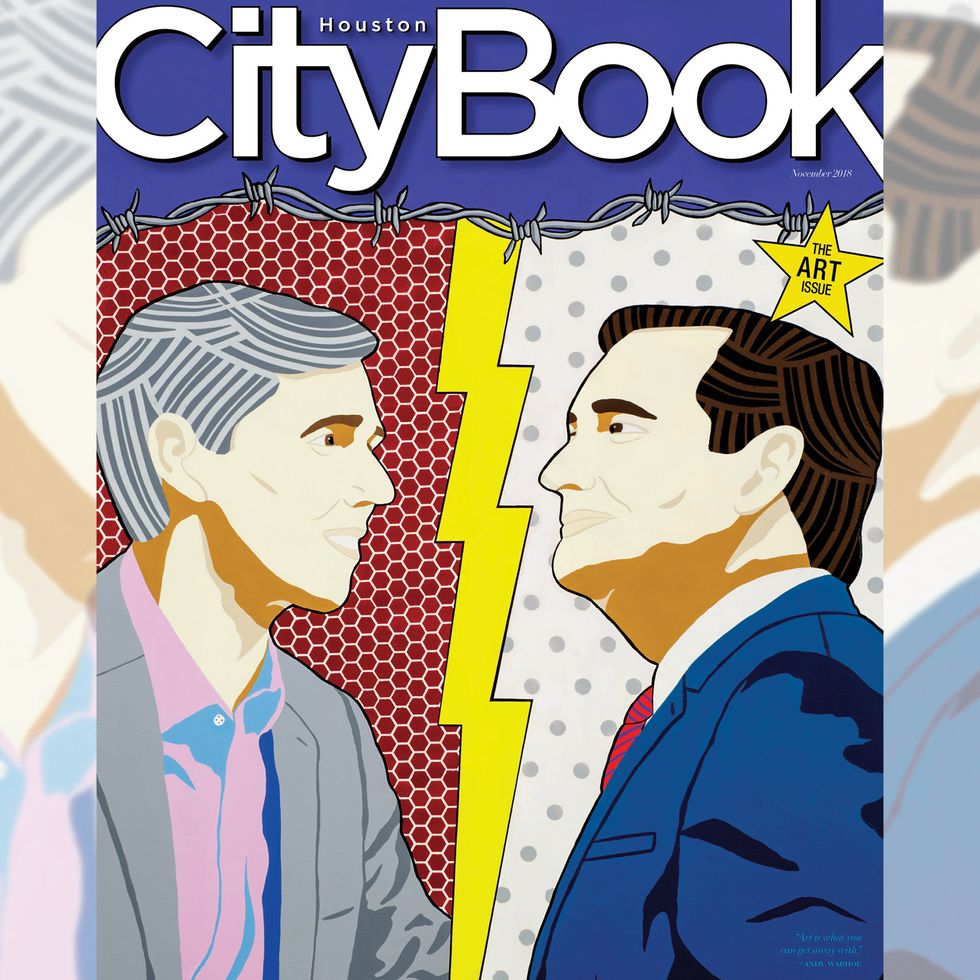 The day after the second Senatorial debate and less than three weeks out from Election Day, Houston CityBook proudly unveils the cover of its November Arts Issue, which for the second time features a timely piece commissioned by a Houston artist. The red-hot, nationally noteworthy Senate race between Republican Ted Cruz and Democrat Beto O’Rourke seemed a worthy subject.

We called on Filipino-American Dandee Warhol. He jumped at the chance to depict both candidates in the pop-art style associated with his earlier career (his newer work tends to realism). “I wanted to use my voice,” he says, “to encourage others to pay attention. People need to be involved in what’s going on around them.” Warhol is practicing what he preaches, as he, for the first time ever, registered to vote while working on the Cruz-O’Rourke painting.

Warhol used a combination of acrylic and spray paint to create the “hard lines and big colors” of the piece that, full size, stands three feet tall, he says, noting that he took special care to create a balanced image that didn’t favor one candidate over the other. He says the barbed wire speaks to controversies over border issues, while the lightning bolt signals urgency. The stars (removed on the cover to make room for the logo) and the color scheme are unsubtly patriotic.

We reached out to the candidates, alerting them they’d be our cover story, and asking them to offer their “closing arguments” to CityBook readers. Graciously, both agreed.

Sen. Ted Cruz, who grew up in H-Town and bases here, has a unique pitch for his hometown. “When the ’Stros won last year — and will again, I hope, this year! — they embodied the Houston Strong spirit that was on full display in the wake of Hurricane Harvey,” he says. “I’ve never been prouder to be a Houstonian than in those days and weeks after the hurricane when we all came together, neighbor helping neighbor, and began rebuilding stronger than ever. It’s a privilege to represent all of Texas, but Houston is special.”

Cruz took aim at his opponent, specifically O’Rourke’s popularity among young people. “Rep. O’Rourke has attracted the adoration of the media and left-wing activists across the nation by embracing extreme policy positions out of step with the people of Texas,” says Cruz. “For some young people, it can be exciting to be part of a Bernie Sanders-style campaign promising lots and lots of free stuff. But Rep. O’Rourke’s policy agenda would be tremendously harmful for young people.

“Young Texans want freedom,” the senator adds, “educational freedom, healthcare freedom, free speech, religious liberty, the right to keep and bear arms, and right to invest and spend the fruits of your own labor.

“Today, we have the lowest youth unemployment in 52 years. Low taxes and regulations are good for young people, because they mean you can get a good job, start to pay down your student loans, and build a career,” says Cruz. “Rep. O’Rourke supports much higher taxes and higher regulations.”

The senator, who with his wife Heidi was shouted out of a DC restaurant by aggressive protesters in September, described the “rage and hatred … on the far left” in a sometimes bitter political season. “[It’s] not good for our nation. We can disagree on policy, and still be civil. Still treat each other with decency. Still respect each other’s humanity. When an angry mob bangs on the doors of the Supreme Court, or screams at people having a quiet dinner, and they’re explicitly encouraged by Democratic politicians to do more of it, we’ve reached a sad chapter in our nation’s history.

“My approach to politics is to focus on issues and substance and policy,” adds Cruz. “When others engage in personal attacks, not to respond in kind.”

In contrast to Cruz’s hard-edged practicality, O’Rourke makes his case a bit more poetically, with familiar rhetorical flourishes. “We’ve … spent the last year and a half traveling to all 254 counties of Texas, to listen to and learn from those we want to serve and represent, regardless of party or geography or anything that might otherwise divide us,” he says. “It doesn’t matter if you’re a Republican, a Democrat, an Independent or a non-voter. Every single Texan is worthy of being listened to, of being fought for, of being represented, of being served.

“Before we are Republicans or Democrats,” O’Rourke continues, “we are Texans, we are Americans, we are human beings. If there were ever a time to demonstrate that, it is now. That’s the place we will start when it comes to ensuring everyone can see a doctor, work a job that pays a living wage, send their kids to a world-class public school, and finally achieve equal justice under law.

“This has been one of the most amazing experiences of my life,” adds O’Rourke, “and it’s given me a lot of hope and encouragement at a very divisive and polarized moment for our country. I’m grateful to have the opportunity to be a part of it.”