Summertime might not seem like the best time to hike Big Bend. But, with the right guidance, it’s an ideal season to take in the Texas treasure’s unique splendor. 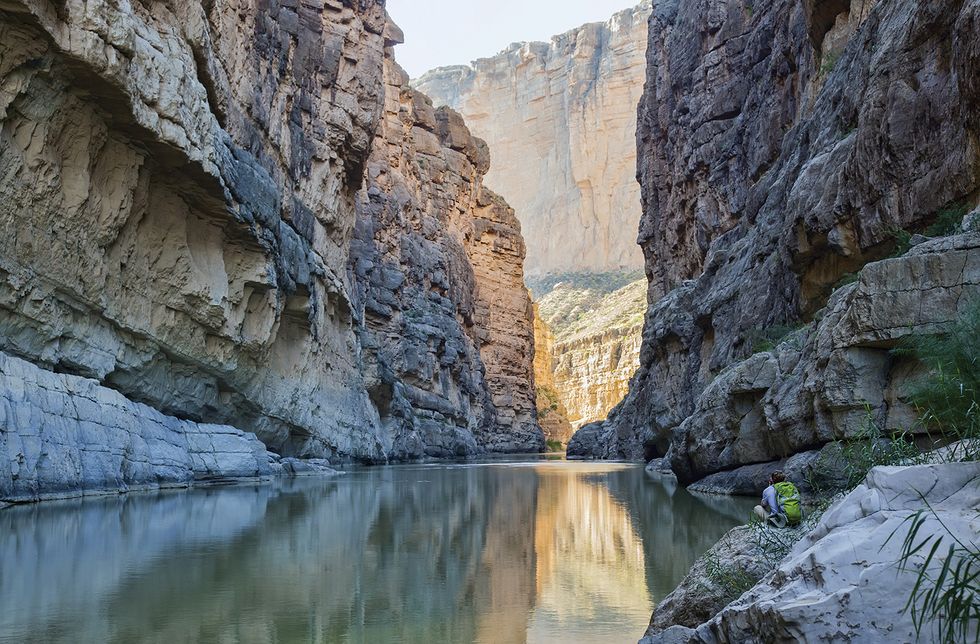 “I can’t wait to visit the Chihuahuan Desert during the hottest time of the year,” said nobody, ever. But then nobody appreciates the delights of the Big Bend region quite as much as the adventurous souls who have braved a Trans-Pecos crossing in summer to discover the treasures of Texas’ most popular national park. In the weeks after the June solstice, the axial tilt of the Earth promises maximum daylight — and maximum fun.

Indeed, those who make the trip to Big Bend National Park between now and Labor Day will discover a zone of deep solitude and uncommon beauty, not to mention a likely respite from Houston’s heat and humidity. For Big Bend holds one of Texas’ few sky islands, located in the wonderfully scenic Chisos Mountains, a forested cluster of rugged peaks rising from the desert floor, where the altitude moderates the summer heat. The southernmost mountains in the Lower 48 may not compete with the Alps height-wise, but with Emory Peak topping 7,825 feet, the Chisos do rival Eastern Europe’s Carpathians — and best swanky Santa Fe by more than 1,000 feet. (Take that, New Mexico.)

Moreover, whether the public has been inspired by President Trump’s promise to build a border wall, the Obama-era initiative to get schoolchildren outside through the “Every Kid in a Park” program, or simple curiosity surrounding the park’s fresh Fossil Discovery Center, which opened in January, visitation is on the rise. In fact, 2016 — which marked the National Park Service centennial — set a record with more than 331,000 visitors trekking to Big Bend, a 10-hour drive from Houston and 3-hour drive from the nearest airport in Midland-Odessa.

No matter the reason for the boom, summer remains an exceptional time to experience the isolation still synonymous with the region.

“We really like our summers out here,” says Greg Herrington, a former Houstonian who for three decades has run Big Bend’s premiere outfitter Far Flung Adventures. Far Flung offers jeep tours and river trips down the Rio Grande, and rents cabins outside the park on the road to Terlingua Ghost Town. “It’s a lot less crowded and a lot more relaxed.”

The relatively chill Chisos Mountains basin in the heart of the park enjoys temps in the mid-80s through August, thanks in part to late summer West Texas monsoons that help keep the vegetation verdant. The basin is notably where you will find Chisos Mountains Lodge run by longtime concessionaire Forever Resorts. The historic lodge offers the only air-conditioned accommodations inside the 800,000-acre park. Savvy travelers will want to reserve one of the romantic throwback cabins constructed by the Civilian Conservation Corps in the 1930s; Cabin 103 boasts the best views. Those who cannot score a retro bungalow can find rooms in the lodge’s motor-court section. Either makes a convenient base for exploring the highlands.

With more than 150 miles of trails extending from the banks of the Rio Grande — scorching in the afternoon, be forewarned — to the cool flanks of the Chisos, Big Bend proves a great place to stretch your legs. Until the heat of Helios passes, the forested mountains represent the best bet for travelers on foot. But regardless of the season, the rugged Lost Mine Trail accessed off the Basin Road (Mile 5.1) embodies the finest day hike in the park. Although the legend of the lost mine appears apocryphal, ascending the rocky 2.4-mile trail past scaly juniper and hearty oaks to the ridge above the tree line offers rich rewards, including a stirring panorama extending into the Sierra del Carmen of Mexico. Just remember to bring water — and a camera!

As evening falls, reasons to descend to the desert floor pile up — the topmost being a leisurely dip in the healing waters of the Historic Hot Springs. The area cliffs reveal a gallery of pictographs left by the indigenous peoples who first visited the springs 3,000 years ago. The 19th century entrepreneur J.O. Langford followed the natives, and developed the pools and nearby buildings, where to this day weary road warriors and tired hikers soak their bones in the 105-degree waters that bubble up along the Rio Grande. Summer visitors may find that they have the hot springs to themselves, though on occasion Langford’s spot also draws party people of various stripes less concerned with serenity than rabble rousing — from bikers to babbling families to skinny dippers.

Elsewhere, cooler evening temps and the cover of darkness bring out the desert wildlife of another sort. A slow-rolling car ride along the park’s Ross Maxwell Scenic Drive just west of the mountains can reveal four-legged inhabitants including rare Sierra del Carmen whitetails — a deer species unique to the park — hog-like javelina, coyote, bobcats and the seldom seen mountain lion. For a chance to peer through geologic time and glimpse dinosaurs, extinct mammals and the myriad creatures that dwelled at the bottom of the ancient sea that once covered the region, stop by the new $1.35 million Fossil Discovery Exhibit. The pavilion and classrooms located 20 miles south of the park entrance at Persimmon Gap show off the remains of a flying lizard with a 35-foot wingspan, the man-sized skull of a long extinct alligator, and more.

If such fossils sound a little, er, tame, then check out the river levels. Once the late-summer rains start sometime after the Fourth of July, Herrington and the guides at Far Flung Adventure are available for one-day floats down the Rio Grande through the astonishing Santa Elena Canyon, a majestic landscape where the rushing green waters split steep limestone cliffs rising some 1,500 feet at their highest point. (In the cooler fall months, Far Flung also books overnight “foodie” floats with veteran Swiss-born chef Francois Maeder of San Antonio; check their website for dates.) “We tend to encourage people to limit their activities to the mornings, because by 2 o’clock it’s just too damn hot,” says Herrington. “But it’s still worth it to go through Santa Elena in one day.”

Herrington notes that a lot of visitors also arrive with little more in mind than putting their feet up. If the Chisos Mountain Lodge is booked, the Far Flung casitas offer a good alternative. Just three miles from the western entrance to the park at Study Butte, the porches offer a fine perch to watch the sun go down and gaze at the Milky Way.

No matter where you sleep, whether in a cabin or maybe a tent in the high Chisos, explorers who add Big Bend to their summer itinerary will soon understand why nobody wants to spoil this slice of paradise.

ABOVE: The Rio Grande carves through the canyons of Big Bend.

Terlingua, an old mining town with tons of abandoned buildings, is a popular destination for park visitors.
Food+Travel
promoted