Once celebrated as the birthplace of both the Industrial Revolution and punk rock, the UK city of Manchester has entered yet another chapter, as a thriving arts and culture capital. 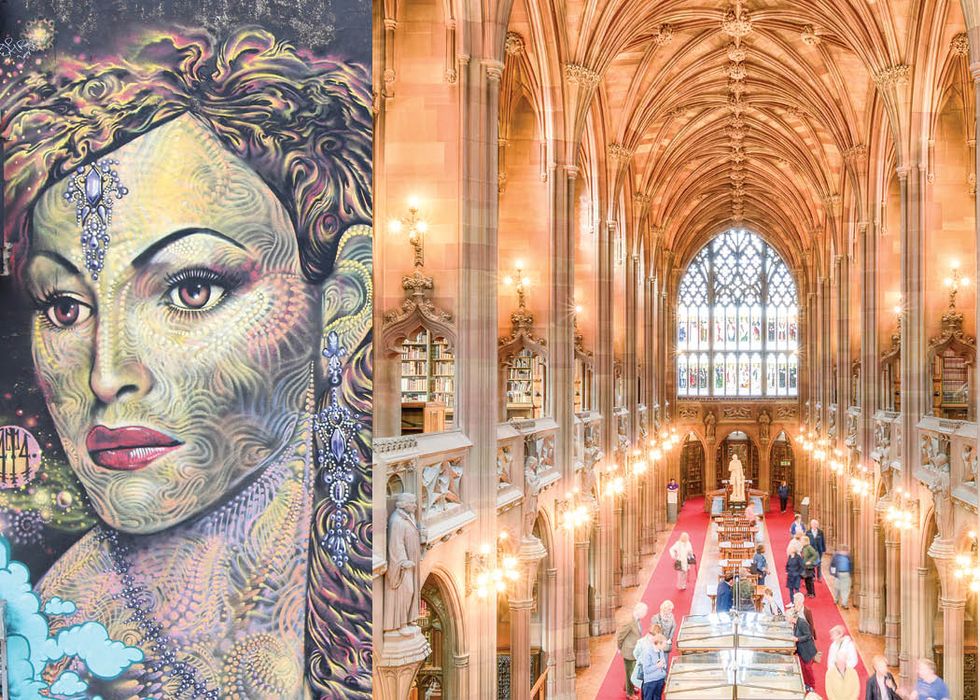 In Manchester, England, a Houstonian may feel right at home. It could be the concrete and construction — a sign of the upward swing and population boom that the city of half a million, two hours from London, is currently experiencing. It could also be the light rail that zips through the middle of town, or the colorful (and statement-making) street art that populates exterior walls of nondescript buildings in neighborhoods both established and gentrifying.

But after spending a bit of time in Manchester — now just seven hours from IAH via a new direct flight on Singapore Airlines’ stunning new A350 craft, whose state-of-the-art upgrades include 18-inch personal television screens and an ultra-comfortable and healthful airflow system that replaces cabin air every two minutes and manages humidity — perhaps what a Houstonian may identify with most is the way the city has risen from the ashes after downturns in its economy. Often referred to as the birthplace of the Industrial Revolution, Manchester was, in the mid-1800s, the cotton-spinning capital of the world. The explosion of engineering, manufacturing and trade that followed allowed for an expansion of infrastructure, and an investment in architecturally significant buildings. (The symbol for the city, a bee, which appears on everything from trashcans to intricate crests, speaks to how busy the city was at one time.) But by the mid-1900s, commerce had declined, and mills and ports and warehouses closed.

In the 1970s and ’80s — known as the “Madchester” years, as explored in the film 24-Hour Party People — the town enjoyed a moment in the spotlight once again, this time as the center of the punk-music scene. The Sex Pistols performed their first gig at the city’s Free Trade Hall in 1976 for a few dozen people, paving the way for fellow Manchester artists The Smiths and Joy Division.

And in 2017, Manchester is poised to make a different sort of cultural statement. Beautiful historic buildings, in both classical and gothic styles, abut glass skyscrapers; the world-class Whitworth Art Gallery coexists with modern conveniences like Chapter One, a new bookstore/coffee shop that one local calls “painfully hipster.” The ways the city’s colorful history seeps into Manchester’s current cultural reawakening is impressive, and engaging.

One such example is the Principal Manchester hotel (phcompany.com). The Victorian landmark building, which was built in the 1800s and was originally the headquarters of an insurance company, reopened in the fall after a stint as the Palace Hotel. A $30 million renovation highlights stunning original architecture, including a stain-glass-domed reception area and exposed drainpipes, and a commanding clock tower — adorned with that Manchester bee symbol. Guest rooms are mostly modern in décor, with elegant old-world touches like a fireplace or tiled brickwork.

One of the most impressive portions of the extensive revamp is the Principal’s restaurant, The Refuge, by two former DJs. It’s more than a restaurant, though, as the owners outfitted the sprawling first-floor space with a 40-foot granite bar, multiple sitting areas, work stations utilized by creatives during the daytime, a “den” with foosball and pool tables, and a glass-encased “winter garden” cocktail lounge. But still, the restaurant portion shines bright, with a menu of small plates that span the globe: Good bets are the crispy lamb shawarma, the tuna tartare with passion fruit, and a great version of the fire-roasted Padron peppers that seem to appear on every bar-bites menu in Manchester.

Another example of new-meets-old is the Free Trade Hall, the site of the Peterloo Massacre, the origins of the Sufragette campaign, hundreds of political speeches and then-groundbreaking concerts, and now, the Radisson Blu Edwardian hotel (radissonblu-edwardian.com). The hotel maintained two sides of the impressive palazzo-style façade, as well as the original staircase and significant sculptural works, and expanded southward with a 15-story stone-and-glass building to house 260 guest rooms.

Nearby, the Spinningfields financial district is distinctly modern. The glass-and-concrete-filled luxury shopping, dining and business area is home to the high-end Australasia restaurant and the fun Alchemist bar (thealchemist.uk.com), a UK chain that feels nothing like an American chain. Here, enjoy color-changing, smoke-emitting, chemistry-inspired cocktails prepared by knowledgeable — albeit not super chatty — bartenders with ingredients like fruit, herbs, “childhood” and “magic.”

Less than a five-minute walk from here — the entire city is incredibly walkable — is the John Rylands Library, a neo-gothic structure built to look like a church, with beautiful sandstone arches and accents of bronze and stained glass. In 2007, the building expanded. A four-story building containing reading rooms, storage and exhibition areas was attached seamlessly to the existing library, but in a distinctly contemporary architectural style, making the John Rylands Library one of the most unique structures in the country.

And another 15-minute walk away is the gentrifying northern suburb of Ancoats, an industrial enclave near the art-savvy Northern Quarter. One Mancunian referenced the significant non-mainstream, activism-heavy “DIY culture” of the areas, as demonstrated by street art. Artists both established and underground festoon buildings, many of which were previously cotton mills and warehouses, with bold pieces — murals painted on brick walls, sculptures perched on rooftops. Nine of the wall-spanning murals in the bohemian district appeared as part of the Cities of Hope street-art festival last spring, during which international artists were commissioned to create sprawling paintings, each honoring a different nonprofit or bringing to light a particular social injustice. A tour by a local like Hayley Flynn (theskyliner.org) is a great way to receive a modern history of Manchester through art.

The way Mancunians have embraced and enhanced their city’s past, with regard for historical significance, an appreciation for a modern aesthetic, and acceptance of its industrial roots, makes for an interesting visit. Houstonians, take note.

WHETHER YOU’RE IN the mood for intimate dining, a destination to impress, or a sexy spot that electrifies, Houston has you covered. For Valentine’s Day, here’s your perfect 10 — with specials to boot!
Keep ReadingShow less
Food
Trending
food news