For a young ceramicist, showing at prestigious Redbud Gallery this month, breaking sculptures into bits is just part of the artistic process. 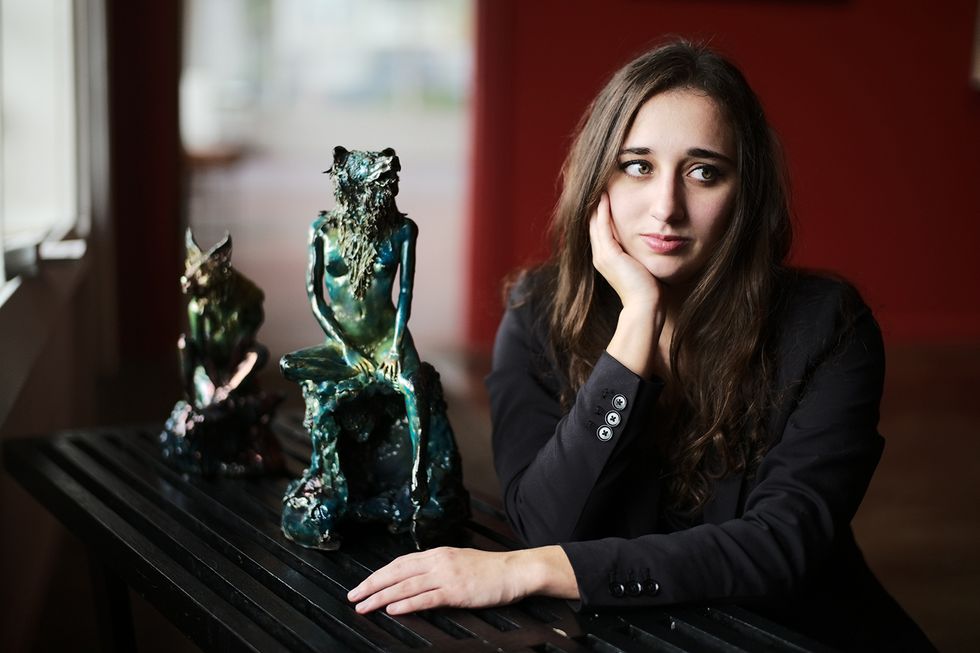 The artist spends as much time as possible inside a backyard shed in Batson — about an hour’s drive northeast of Houston — that she has fashioned into a makeshift art studio, where she molds anthropomorphic figures from clay. But that’s not always the hardest part: Costlow then strategically places the raw-clay creations inside of her car for the one-hour drive to Lamar University, where she bakes the clay into sculptures via the beautiful raku-fire method.

The figures don’t always make it to the Beaumont kiln in one piece. “It can take four to six hours to reassemble from the rough car ride,” says the dark-haired Costlow. “I try to think of the reassembling as part of the process.”

Once put back together again and fired, the results are artworks that, at a cursory glance, appear to be human forms. Step closer to Costlow’s small but potent sculptures (which usually measures between nine and 14 inches tall) and the viewer will see a female nude with the intricately detailed head of a deer, lizard, bird or some other animal that Costlow spots during her frequent adventures to beloved nature spots such as Big Thicket National Preserve. A dramatic raku glaze, achieved through the Japanese-inspired method, gives Costlow’s figures a bold, seductive quality.

“I often feel like my sculptures are imbued with a sense of nostalgia,” says Costlow, who’s influenced by Lamar professor Linnis Blanton’s large-scale spiraling sculptures, Beth Cavener Stichter’s human-esque ceramics, and Alessandro Gallo’s animal-human hybrids. Costlow’s latest exhibition Feral, on display Dec. 2-31 at Redbud Gallery (303 E. 11th St., 713.862.2532), showcases more than 15 original figures that have been in the works for more than a year.

Since graduating from Lamar University with a bachelor of fine arts in 2015, studying abroad in Italy, and exhibiting work at the Art Museum of Southeast Texas, Costlow has worked several jobs, ranging from bartender on a Port Aransas pirate ship to her current gig as a high school art teacher. One day, after navigating the inevitable obstacles, she hopes to make the big leap.

“It would be a dream to work as a full-time artist,” she says. “I try to make sculptures after work and on the weekends. It would be nice to experiment a bit more with my work and see how it evolves.”