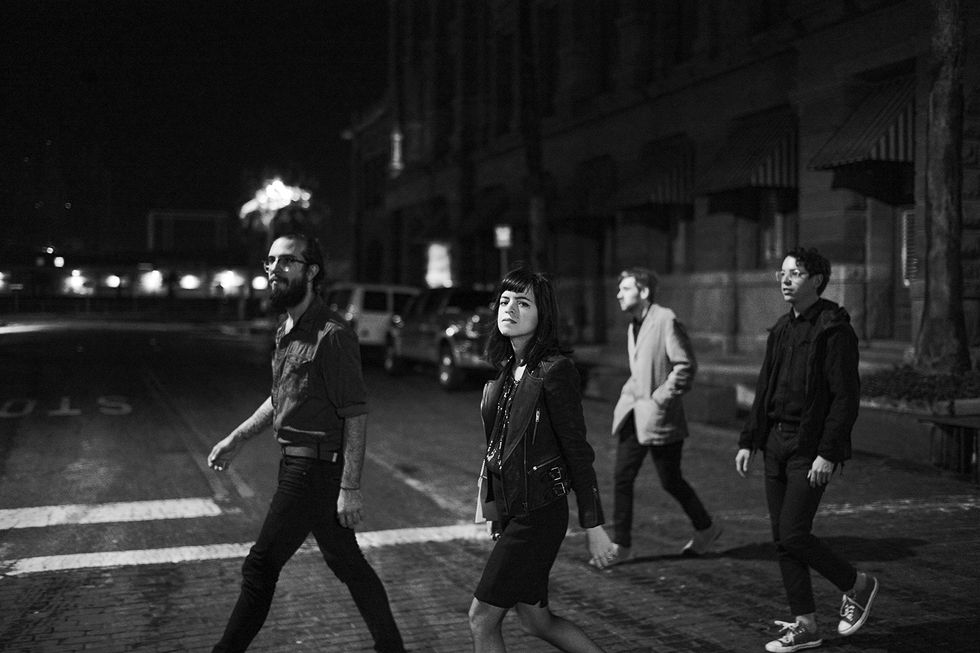 Lauren Eddy, frontwoman for Galveston dream-pop band El Lago, may consider herself a latecomer to rock music. “This is my first time playing electric guitar, and this is definitely the first time doing the rock-band thing,” says Eddy, who formerly stuck to acoustic sounds. “I’m 30. I got started with this band at 27. Much later than a lot of musicians.”

Not like anyone cares, or can even tell; Houston Press, for example, called the group’s EP Colors, released in November on Houston-based Miss Champagne Records, “one of the prettiest and most intense” records of 2017.

Engineered by Grammy-winning producer Steve Christensen at SugarHill Recording Studios, Colors is an eight-song deep dive into shoegazy indie rock. It’s comparable to a forward-sounding version of Cocteau Twins, thanks to Eddy’s dreamboat, Kate Bush-like vocals. Her husband Charles Eddy is on drums and her brother Jacob Villarreal plays bass, while friend Jaron Hall is on guitar.

“I hate to say it’s a family band, but it kind of is,” laughs Lauren, who writes all of the lyrics and often brings demo versions of songs-in-progress to practice. From there, the group jams out some ideas, writes out parts for their respective instruments and eventually lands on a fleshed-out song.

The soft-spoken Lauren, who had never formally played in a band until her gang got together a few years back, says she developed her vocal and guitar style in an “organic” fashion, sponging as many recommendations as possible. “I found a lot of music from people coming up to me and saying, ‘Hey you remind me of so-and-so.’ The first time I listened to Kate Bush ... I was like, ‘Wow, I’ve never heard anybody sing like this.’ She has been a big influence vocally. For guitar, it was more about feeling it out … in developing a style.”

The pretty brunette works part-time as a baker at a coffee shop on The Island, and lives with hubby Charles at the National Hotel Artist Lofts, the historic 1800s building that has had former incarnations as an opera house, office building and hotel. There, at the affordable live-work space for artists, Lauren loves to spend hours on a home-cooked meal.

In addition to the band — which gigs regularly at Shoeshine Charley’s Big Top Lounge, Walter’s Downtown and Galveston’s Old Quarter Acoustic Café, and is planning a summer swing of the eastern U.S. in support of Colors — Lauren has published the monthly Wake the Zine for the past two years. The printed and online publication features musician interviews, visual-artist profiles and monthly Galveston show listings. “The zine is a way to promote events here,” she says, “to try to bring in new people.”

On the Caribbean’s Dutch Island of Curaçao, the Emerging Art Scene Is as Colorful as the Scenery