Grace Under Pressure in ‘Be Someone’ City

Our leaders, first responders, reporters and everyday heroes stayed calm in the face of danger and devastation — and mostly just did what had to be done. 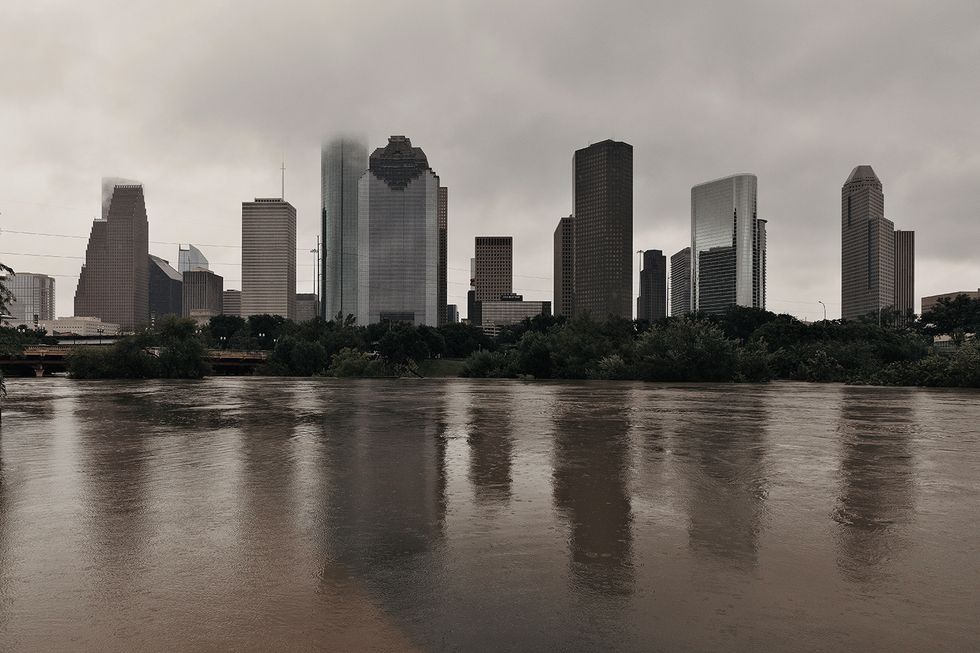 Sometime in the middle of the night, it stopped raining. I didn’t notice until I woke up the next morning, from a fitful sleep, to hear lawnmowers and leaf blowers firing up in front of my house. On most mornings when this happens, I resent the intrusion and curse them for coming so early. Today, I was grateful for the sign of normalcy: There they were, my “yard guys,” back to work. The water had receded from the street, leaving just a few inches pooled in the gutter. The grass was impossibly green and thick, more Ireland than Texas, and a few alien vines, emboldened by the weather, had sprouted from odd spots and needed to be pulled.

Elimelet runs the crew. Always hidden behind opaque sunglasses and a straw cowboy hat, he rarely speaks. We’ve exchanged maybe 50 words in the three years he and his guys have been cutting my lawn, and half of those have been in Spanish. He pointed at the side of the house, where the debris line from flooding reached up to within inches of my front door, and gave me a sympathetic nod. Then he held up his hand, spread his fingers to indicate the number of weeks for which I owed him payment, and went back to wielding his edge trimmer.

A quick review of the Harvey stats, however, reminds us that what we’ve been through is anything but. Five days, 52 inches of rain, 50,000 people rescued, and at least 500,000 cars flooded. “We’ve got probably 30,000 to 40,000 homes that have been destroyed,” says Harris County Judge Ed Emmett. Andy Teas of the Houston Apartment Association estimates as many as 100,000 apartment units took water. With total damages said to be reaching nearly $200 billion, Harvey will be the costliest weather disaster in U.S. history.

But, despite it all — and this is not something every city can claim after weathering a storm, literally or figuratively — our social fabric remained intact. Why? Because most of us held it together, stayed calm, followed the rules, tried to help each other when we could and, in some cases, just did our jobs.

Consider the first responders — EMTs, police officers, firefighters, doctors and nurses — who were working endless hours, sometimes not knowing whether their own families were safe. And there were the volunteers at the shelters, some of whom were living in the shelter at the same time, who, even after losing everything, thought of the welfare of those around them first.

So many others. The dolled-up drag queen set up outside the George R. Brown offering to touch up evacuees’ make-up and hair. The brawny bubbas of the Cajun Navy, in camo and waders hauling wet children and pets into the bows of their bass boats. And our own homegrown bros, sporting backward baseball caps, piloting their jacked-up pick-ups to those in peril and then posing for smiling Instagram snaps afterward.

There were the trio of bakers trapped inside El Bollilo Bakery who spent two days straight baking bread, kolaches and pan dulce — consuming 4,400 pounds of flour — all of which went to evacuees. Or the pair of 30-something Hasidic Jews, who, in long beards and yarmulkes, commandeered a retired, six-wheeled Army truck parked at IAH, drove it to Meyerland, and spent days fishing people out of flooded homes and offering kids cookies. When a TV reporter asked where they learned to be so fearless, their blunt, no-BS response: “Israel. Military.”

Grace under pressure was the order of the day. And Mayor Sylvester Turner set the tone early, when, in dealing with what The New York Times called a “no-win” dilemma, chose not to issue an order of mandatory evacuation. It was easily the most difficult decision of his tenure as mayor. (No, filling in 10,000 potholes doesn’t count.) Faced with criticism for the decision, he calmly explained: “You literally cannot put 6.5 million people on the road … issue an evacuation order and put everyone on the highway. You are really asking for a major calamity.”

His delivery, like his decision, was based on rational thought rather than emotion. This is so very in keeping with the character of our city.

Judge Emmett echoed Turner, drawing upon — of all things — reason: “If we wanted to call an evacuation, we wouldn’t even know where to call it,” he said early on, “because we don’t know where the rain’s going to fall.”

And when it came to taking care of the most vulnerable in our community, our city chose compassion over intimidation in reassuring the undocumented that they would not be interrogated, denied or arrested if they showed up to a shelter. Turner, a Harvard-educated attorney, made the issue personal: “If someone comes and they require help and then for some reason [someone] tries to deport them, I will represent them myself.”

Police Chief Art Acevedo, whose highest profile case to date was the Tom Brady “Jerseygate” incident after the Super Bowl, exhibited the comportment we expect from a veteran law enforcement officer. He repeated throughout the storm that his department’s priority was keeping people safe and tending to those still trapped in their homes, not arresting illegal immigrants. His strong warning to potential looters was also appreciated. “We’re a welcoming city, but we’re not going to tolerate people victimizing, especially committing armed robberies, in our city,” he said before threatening them with serious punishment.

If there was any unlikely star to emerge from Harvey it was Jeff Lindner. The 35-year-old meteorologist with the Harris County Flood Control District was unflappable, positively Spock-like, when facing the media for days on end, to talk about rising levels of water. It was he who had to handle the thankless task of explaining why releasing water from the Addicks and Barker reservoirs, and deliberately flooding several neighborhoods, was a good idea. Before the storm he might have been a faceless government official, but by the end of it, #JeffLindnerFanClub was trending on Twitter, and a GoFundMe page raised some $15,000 to send him on vacation. (Lindner says the money is going to flood victims instead.)

When people were not turning to Lindner, they were logging onto Space City Weather, a website run as a hobby by Eric Berger, a former Houston Chronicle reporter who covers space issues for the website Ars Technica. Berger’s sober, straightforward and hype-free forecasts were a welcome voice of sanity amid the rising crescendo of the television news coverage.

Not that there weren’t plenty of TV journalists who performed superbly. There certainly were, and one was KHOU’s Brandi Smith. After her station flooded, forcing everyone to evacuate their building near Buffalo Bayou and cease broadcasting from there, she and her cameraman Mario Sandoval were left to report non-stop for 30 minutes from Beltway 8 and the Hardy Toll Road. In the midst of it all, Smith spotted a man in an 18-wheeler that was quickly being subsumed by floodwaters in the road below and had the presence of mind to flag down a Harris County Sheriff’s Office truck pulling a boat. The TV crew kept shooting until the man was saved and the battery on their camera gave out.

It’s the kind of thing that makes you proud. You can understand why the #HoustonStrong hashtag has become so popular. It fits, but it also mimics what Boston used after the terrorist attack on the Boston Marathon. We’re not Boston, and going forward I think we need our own slogan.

May I humbly suggest we adopt something familiar and authentically Houston, something identifiable with our city that promotes the high standards we set as a community during this record-setting natural disaster? Something plainspoken and Spock-like of which Jeff Lindner would approve? How about we adopt the instruction from the graffiti that has adorned the rail bridge over I-45 South heading into Downtown, itself a beloved eyesore. It reads, in crudely painted five-foot letters: “Be Someone.” (Pictures of the flood rising close to it during Harvey made the rounds on social media.)

It doesn’t say “be someone special,” “be someone brave,” or “be someone important.” It doesn’t tell you what kind of person to be. Instead, it is a straightforward, sober entreaty to exhibit character and, by implication, to step up, fulfill your obligation to take part in society — and, hopefully, make it better. How you go about it is up to you.

You could be a politician or a city administrator, a police officer or a soldier, a TV broadcaster or internet weatherman, a drag queen or a baker, a bubba or a bro — or just a guy who shows up with his crew to cut the lawn in the hours after the rain, playing your part in helping a weary city inch that much closer to normal.