Alongside the railroad tracks and funky warehouses of the arts district, relaxed, urbane Poitín scores. 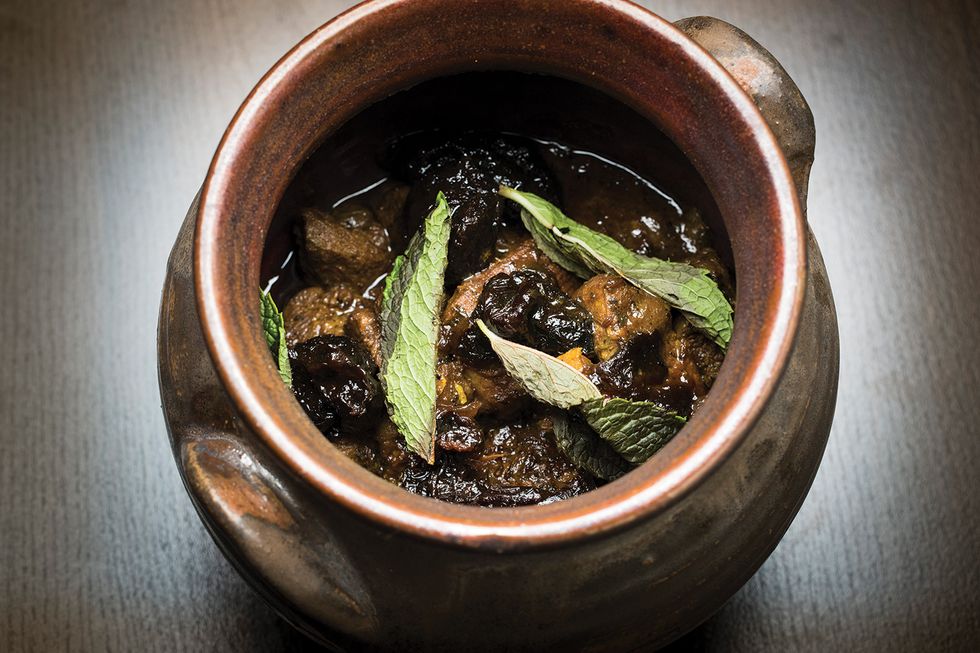 The namesake liquor of the Washington Avenue Arts District’s new Poitín is oft described as Irish moonshine. And so, when tasting it for the first time — in The First Rule Is, a spin on a fruity gin-and-egg-whites Clover Club cocktail — you might brace for rubbing-alcohol harshness. But, like almost everything about Dubliner Ian Tucker’s stylish Poitín (2313 Edwards St., in Sawyer Yards, 713.470.6686), it’s actually unexpectedly unassuming. It’s like vodka’s quietly offbeat cousin.

Even Tucker himself, the Balls Out Burger impresario who affected a broodingly handsome air for his profile portrait in CityBook this spring, is actually affable and easygoing. “As an immigrant, I have been embraced by the Houston community,” he says, explaining the good-natured ethos of his new eatery. “I have envisioned this restaurant to be a culinary embodiment of the city’s inclusive spirit.”

The ambitiously large-scale Poitín, dark and industrial with a big-city-bar vibe inside — with an herb-garden-ringed patio in back overlooking first an active train track, then in turns in the distance, a warehouse rehearsal site for rock bands and an expansive, glittery new take on the Downtown skyline — seeks to homage Houston’s diversity in its menu. The flavors of the multicultural menu by New Orleans-born Kiran’s alum Dominick Lee are just about the only thing at Poitín that aren’t surprisingly understated. Bold tastes dominate. The hummus appetizer is topped with “pulled” harissa-zinged lamb neck, and La Galhina is a half chicken that’s marinated in Thai-spiced coconut milk before grilling.

Poitín, which adds brunch in June, is a uniquely urbane experience, a laidback vision of Houston, as seen through the eyes of a hip European.

THIS WEEKEND, THERE’S no shortage of ways in H-Town to ring in the Lunar New Year. From lion dancers to dumplings, here’s a handful of Asian spots around town that are drumming up tasty fun in honor of the Year of the Rabbit!
Keep ReadingShow less
Food
Trending
events