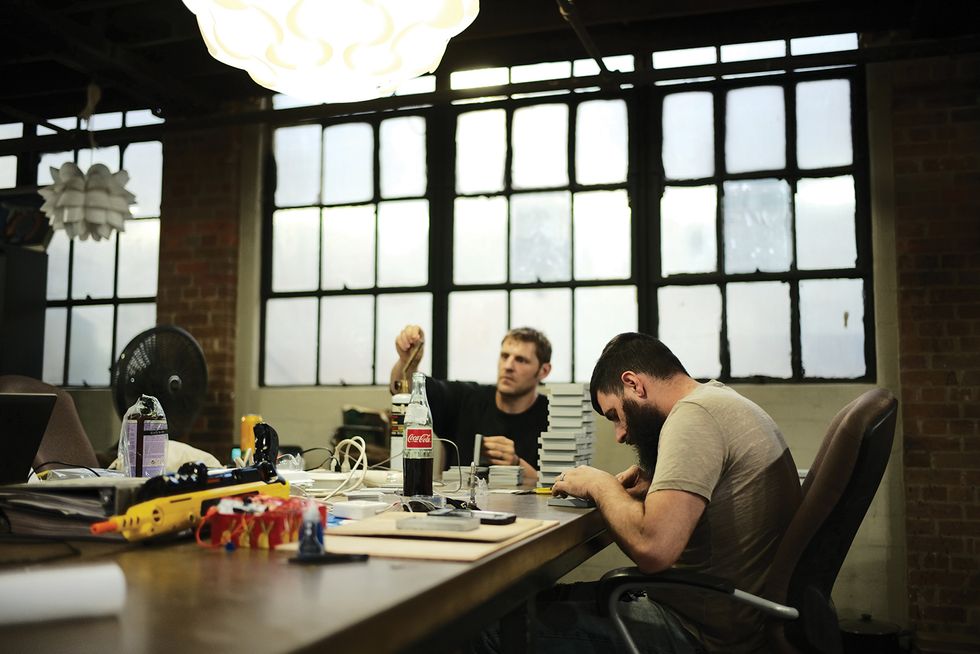 About a decade ago, Roland von Kurnatowski, now 37, noticed a false divide in Houston’s creative community, one that was holding the city back. “There’s the fine arts,” he explains, “and then there’s fabrication, mainly in terms of oil-field work.” Other cities, like New Orleans, seem to recognize the blurred line between artistic creating and technical innovating more readily than H-Town does, he says. “The word innovation is used too narrowly. People think of Amazon or Uber.

“And there’s an environment of complacency here. Innovation is risky,” he adds. “Oil and gas provides high wages and high job security. People might think, ‘Why take a risk?’”

But von Kurnatowski, who owns TXRX Labs in EaDo, believes those innovation-shy days could be ending soon. Thanks to the oil downturn a couple years ago, he says, people may not feel as secure. “We have an opportunity to convert those folks into innovators. The mindset is changing slowly.” TXRX is ready to expedite the evolution.

Von Kurnatowski, Patagonia-clad and bespectacled and talking a mile a minute, cites a New York-based setup as a model. “In Brooklyn,” he says, “there’s a company that caters to small-scale boutique producers and craftspeople and fabricators in a way that allows them access to new tools and processes, to make them more competitive and successful. We don’t have that in Houston.” He vows to make it happen at TXRX, and, truth be told, he’s already on his way.

Right now, a sprawling series of warehouses — acquired one after another over the course of 10 years — make up the 55,000-square-foot TXRX Labs. The nonprofit collaborative makerspace hosts classes like 3-D printing and woodworking for hobbyists, youth and vocational workers, and also provides an “innovation ecosystem” for entrepreneurs and start-ups. Von Kurnatowski has a staff of about 20, all paid to teach classes and consult on projects, and TXRX’s many buildings are filled to the brim with an impressive array of donated equipment and machines that are retrofitted with new control systems. In addition to teaching the skills, TXRX also handles onboarding and apprenticeships, nearly guaranteeing an employer that a TXRX-trained worker will be an asset to his or her company.

Currently, in addition to the educational and collaborative lab spaces, 15 small businesses and startups are housed inside the walls of TXRX, renting space by the square foot. One is Grind, which has prototyped a portable basketball rebounding machine that allows players to throw 1,200 shots in an hour. Weighing 45 pounds and costing $800, Grind’s product is sure to be an attractive option for players, since similar products are on the market for $5K and weigh 300 pounds.

“Our hope is to create a space where innovators can innovate with a lower cost to fail,” von Kurnatowski explains. For someone trying to invent something, such as a medical device, “the development process is expensive, and the time horizon is long.” But he says those drawbacks are “fixable,” given the right mindset. “We want to remove the high cost of prototyping, so that they can get to the next stage, such as angel investors.”

And all of that might be just the beginning. With the help of the East End Management District and the Urban Partnerships Community Development Corporation, von Kurnatowski is preparing to move TXRX down the street to a new 320,000-square-feet campus at 6501 Navigation, which the city will dub the East End Maker Hub, in 2019.

Such a mega-expansion would be the culmination of a long-term goal. The Rice grad, who also holds a Ph.D. in economics from UH, and a handful of fellow programmers and engineers used to meet at Caroline Collective, one of Houston’s first coworking spaces. When von Kurnatowski realized that there was no space for all the tools they wanted to utilize, he created TXRX, which stands for “transmit, receive.”

He wants to teach residents of Houston — in particular, of EaDo, where nearly 40 percent of residents live under the poverty line — a range of skills like CAD, CNC laser-cutting and router table operation.

The new facility at the East End Maker Hub will allow von Kurnatowski and his team to train and find jobs for 300 more people every year, with an estimated combined economic impact of more than $100 million. “There are so many opportunities for folks who are not college-bound to pick up well-paying work and enter the middle class,” he says. He’ll also be able to expand TXRX’s after-school STEM programs, and increase the availability of space and amenities for entrepreneurs.

Roland von Kurnatowski, at left, is preparing to move his TXRX Labs to a huge new campus nearby in EaDo.

“Innovation can touch everyone on the socioeconomic scale,” he says, “but we need to provide resources for everyone.”

It's Literally Freezing, Houston. You Need These Soul-Warming Soups Now