Got beer? Houston is filling to the brim with new breweries, joining stalwarts Karbach and Saint Arnold and new-classics 8th Wonder, No Label and Buffalo Bayou as hip drinking — and eating — destinations. Prefer malty and rich or yeasty and aromatic? Find a cure for all your ale-ments at one of these newbies. 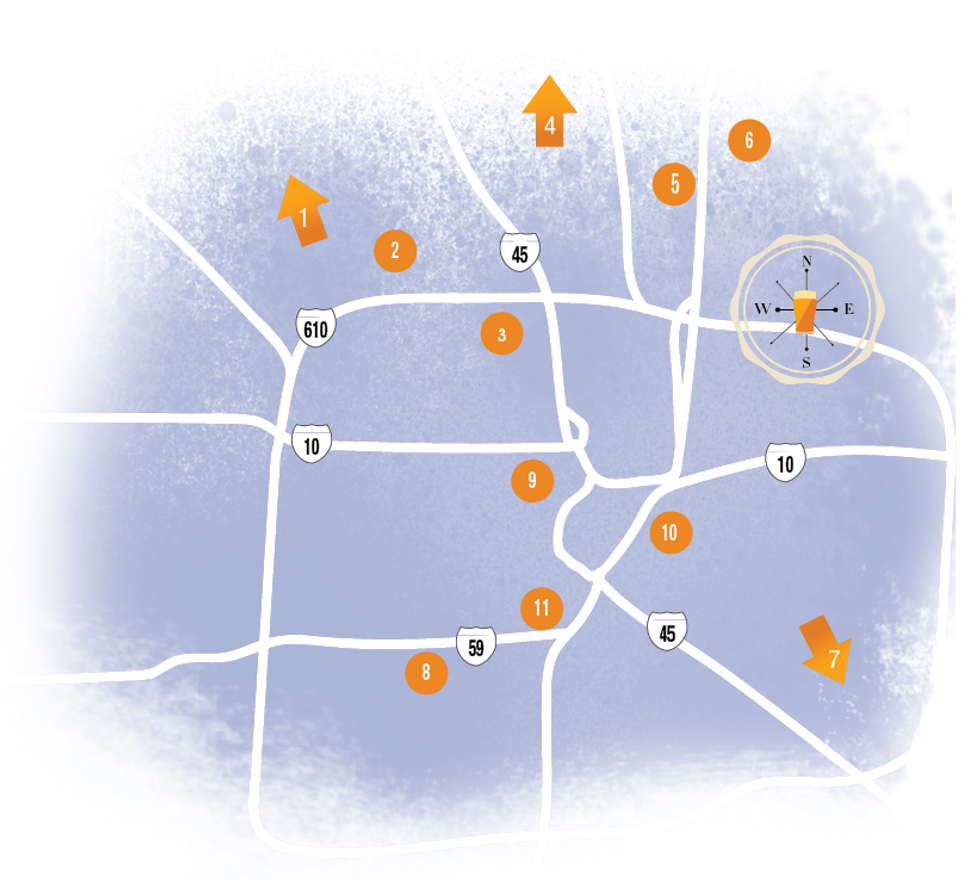 1. Boasting a happy hour and live music, Willowbrook-area 11 Below Brewing Company is popular for its Oso Bueno American amber and the Negative Space, an imperial chocolate milk stout.

3. Joining Town in City in the Heights is Eureka Heights Brew Co., which opened in the fall and is named for the area’s fault system.

4. Trek to Tomball for a visit to BeardedFox Brewing Co. Post up at a picnic table outside and pair the creamy No. 48 Porter with bites from a visiting food truck. Also in Tomball, Fire Ant Brewing Co. opens soon, with 15 signature brews. And in Conroe, B-52 and Copperhead have joined the very popular Southern Star as breweries-to-know. B-52 produces 40-plus beers — and serves up to 20 in the tap room, where games like ping pong, corn hole, even Frisbee golf are played. Meanwhile, Copperhead boasts interesting specialty beers like the Cherry Medusa Fruited Belgian Quad.

5. The food at year-old City Acre Brewing is inspired by its onsite garden and its own seasonal brews.

7. Bakfish Brewing in Pearland doesn’t have food, but guests aren’t left disappointed. Pull up a bar stool in the tap room and take in the operations of the 30-barrel brew system while sipping the hoppy Defying Gravity Double IPA.

8. With a killer location in Rice Village — complete with a pup-friendly patio meant for lingering — Baileson Brewing Co. opens its doors this summer, pouring the malt-forward peat-smoked Scottish ale and the chocolaty Russian Imperial Stout.

9. Go for the beer, stay for the food at Australia-inspired Platypus Brewing on Washington. Beers like the Troppo, an American wheat ale with Australian mango and passion fruit, pair well with food fusing exotic Australian dishes with Texas flavors. Head upstairs for skyline views! And around the corner, near Silver Street Studios, check out Holler Brewing Co.

11. More of a local watering hole than an industrial brewery, Midtown’s Under the Radar Brewery offers a biergarten vibe, flatscreens galore and five brews on tap.