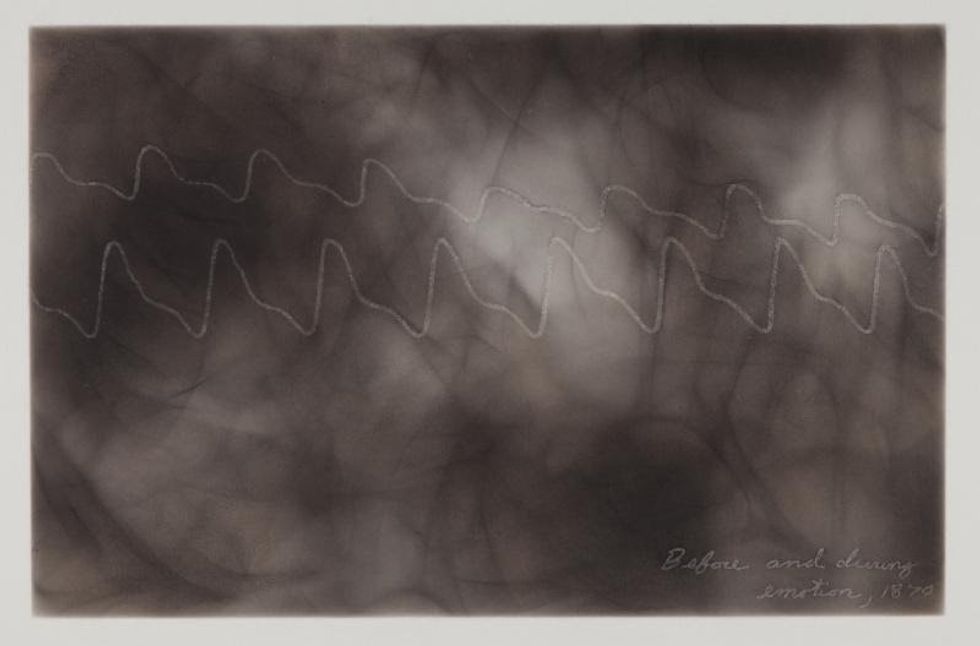 To walk through multidisciplinary artist Dario Robleto’s mysterious, yet strangely exhilarating new show of prints, The First Time, The Heart, on view through May 26 at Inman Gallery, is to bear witness to the lives of 50 ordinary individuals whose heartbeats were detected, measured and transcribed by a 19th-century gizmo called the sphygmograph (or “pulse writer”). Using a stylus of human hair, this revolutionary invention transcribed to paper a person's heartbeat in real time.

Robleto has brought these historic “pulse recordings” back to the future by printing the original, wavy lines in invisible ink, covering the print with soot rising from the smoke of a candle’s flame, submerging the work in a bath of shellac and denatured alcohol, and then excavating the now-buried “pulse line” with a chemically treated brush. The resulting images emerge before your eyes like ghosts, and call out to you like voices from the past.

“Nobody thought to write their names down,” says the San Antonio-born Robleto, who speaks of the subjects gently, and with respect, as if they were old friends or distant relatives. “Here’s somebody who left one of the most important parts of their life behind: their heart. I want to tell their stories as best I can.”

Interestingly, what the sphygmograph operators did write down are odd descriptions of what was each subject was experiencing during the process. Jotted down are things like “Name called while sleeping” and “Smelling lavender.” Robleto was moved by the simplicity of these lines, and collaborated with poet Adrian Matejka to hang the show so that the images and accompanying descriptions can be read as stanzas of a poem.

And there’s more. A sculptural and sound collaboration with Patrick Feaster complements the exhibition, with a sonic realization of some of the pulse lines in the show.

Before these first pulse recordings, the human heart was widely believed to be, quite literally, a “conduit for the soul,” and scientists were reluctant to explore and study the heart. Even the idea that the heart could become diseased was controversial.

“My show investigates why that is,” explains Robleto, who offers that members of scientific, spiritual and artistic communities often find themselves at odds with each other. With this in mind, one of the exhibition’s public programs (presented April 19 at MATCH) will be a discussion between Robleto and Dr. Doris Taylor, the director of regenerative medicine research at the Texas Heart Institute. Robleto describes Dr. Taylor as “a rare breed” of medical professional who is open to discussing the short- and long-term ethical and cultural ramifications of “what happens when you put a zero-year heart in a 60-year-old body” with an artist.

“I don’t see how we’re going to solve the problems we currently have in the world unless we reunite these different disciplines,” says Robleto, who has helped organize the International Conference on Mobile Brain-Body Imaging and the Neuroscience of Art, Innovation and Creativity, and has worked with scientists to debate how best to communicate with intelligent beings outside of our galaxy.

“If you talk to each other,” says Robleto, “the arts and sciences will change, and suggest ways forward.”

On a Perfect Spring Night, Hermann Park Fans Gather for Dinner Under the Stars

Veterans are Powerful Leaders in the Biz World, says this Successful Entrepreneur