The
Magazine
The
Podcast
hurricane harvey

The storm ravaged her home, but it unified the people of her city, and revealed them as heroes. A renowned author reflects. 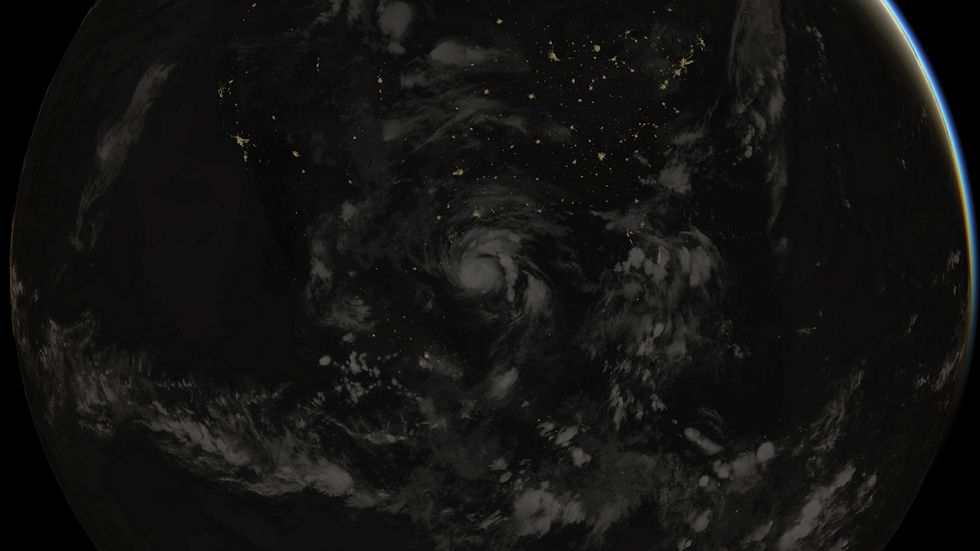 I woke in the dark to the dreaded beeping that had become all too familiar over the last couple of days: another tornado warning. I could feel the fear, heavy as an iron ball, lodged deep in my body. Just yesterday a tornado had hit Fort Bend County, and on streets not far from us, entire roofs had been snatched away. Now the wind roared around our house. Peering out the window, I could see the tall trees behind my house bent sideways. It looked like any moment branches could break off and come flying straight at us. The fields behind us had turned into a huge lake, the edges of which lapped at our backyard, only a few frightening feet from the house. In front, the street was a rushing river, the water halfway up our drive already. And a little ways away, I knew the Brazos River had risen higher than it had in the last 800 years. Officials were afraid the levies might break under the pressure. Our zone had been under voluntary evacuation orders for the

last three days. But horrifying memories of being stuck on the freeway some years before, with Hurricane Rita bearing down on us, had stopped us from leaving. Now I wondered if we’d made a big mistake.

Attempting to check if the house was OK, my husband and I stumbled through the dark of the living room — into water! Lots of it. Water was cascading down our chimney, our walls. Something was damaged pretty badly on our roof, and there was no way to fix it. Would the entire thing come down in this storm? There was no way to know.

We did the best we could for the rest of the night, with buckets and roasting pans that filled in minutes. We used up every single towel, bed sheet, comforter and t-shirt in the house trying to soak up the water, then finally gave up in exhaustion.

If this were a novel, things would have worsened rapidly, with us climbing to the collapsing roof, desperately waving flashlights, hoping to be rescued. But my story has the kind of deflated ending that I’m always warning my creative writing students about, but for which I was very thankful in real life: At one point, the long night ended, the rains let up some, and we were able to get a tarp on our roof.

Did I feel grateful? Not really. Because when one is focused on one’s own tragedy, it looms large enough to cover up even the sun. So I was mostly upset and close to tears of exhaustion — until I turned on the TV and saw how the rest of Houston, including neighborhoods very close to us, had fared. When I saw the pictures of the extensive flooding and the ruined homes, and so many people’s lives in terrible danger, fellow Houstonians who were trying to save their children and their elderly and their animals on top of everything they were dealing with, that’s when I realized how blessed I’d been.

But there was something else going on. So many brave first responders were putting their lives at risk to save the people of the city. And even more amazing, regular Houstonians were performing heroic acts to bring strangers to safety. People in boats or rubber rafts reaching out to people trapped in their homes or caught out in the flood as they tried to escape. People pushing grandparents loaded into grocery carts through streets that had disappeared under the rush of water. People holding babies — other people’s babies — above their heads as they signaled for help.

The flood had swept away the cautious boundaries we like to build around our little everyday lives. We faced Harvey together. We were one. We were Houston Strong, a phrase that was beginning to resonate everywhere, outside and inside us.

I saw more of the Houston spirit over the next days as our city and its surroundings struggled to deal with one of the worst storms Texas has ever known. The groceries and stores weren’t open yet, but at our neighborhood church, people dug into their own dwindling pantries and cupboards and medicine cabinets and donated so many supplies for Harvey victims that volunteers could barely keep up with the inflow. People opened their homes to friends who’d lost homes — which might be expected — but also to acquaintances and sometimes to strangers. Because suddenly we weren’t strangers. We were all Houstonians.

When the waters receded, I went to help in one of the flooded neighborhoods and was devastated by the amount of destruction I saw around me. Everything that had been on the first floor of homes was ruined. Piles of furniture, photographs, TVs, music systems, treasured decorations — a lifetime of loving care and memories and hard-earned savings — were being thrown on the front yard of every house, mixed in with a jumble of torn-out soggy drywall, warped cabinets and swollen mattresses. Streets and streets on end looked like that. Sometimes I’d see residents sitting on the front steps, their heads in their hands, stunned and overwhelmed. It was an apocalyptic landscape, more fitting on a dystopian movie set than in my beloved city.

But the volunteers! Bless them! They came from all over, braving the horrendous traffic that jammed our freeways in the wake of the flood. They were of all ages, from teenagers to adults — to a 70-year-old Chinese grandfather who pulled a wet-vac on a little red wagon from home to home, wordlessly sucking up whatever little water he could. They weren’t necessarily trained, but they were willing to work hard and long on jobs that weren’t helicopter-rescue glamorous but that ultimately made a huge difference. They tore down walls, pulled out soaked insulation, carried furniture, bagged up rotten food, swept and mopped, delivered meals and water and drove the residents — most of whom had lost their cars — to the doctor or the grocery or the FEMA centers. Spirited and filled with a can-do attitude, they cheered people up by their very presence, which seemed to say, Look, you’re not alone. It’s tough, yes, but we’ll get through this together. And best of all, they were an amazing mix of colors, black and white and many shades in between.

At a time when this country seems to be torn apart by separatist politics, Houstonians in all their diversity were holding out hands to each other and emanating the true spirit of America.

Looking at the scene around me, I remembered an old saying my mother had been fond of: It’s an ill wind that blows no good.

As I put on my mask and helped carry debris out of a gutted house, I certainly hoped that we’d never have to go through something as harrowing as Harvey again. But I also hoped that we’d be able to keep alive in our hearts the Houston Strong spirit that rose up in its wake.