In its FotoFest nod and a concurrent artifacts exhibition, the MFAH highlights the quirkiness of mid-century India, and the unique majesty of its distant past. 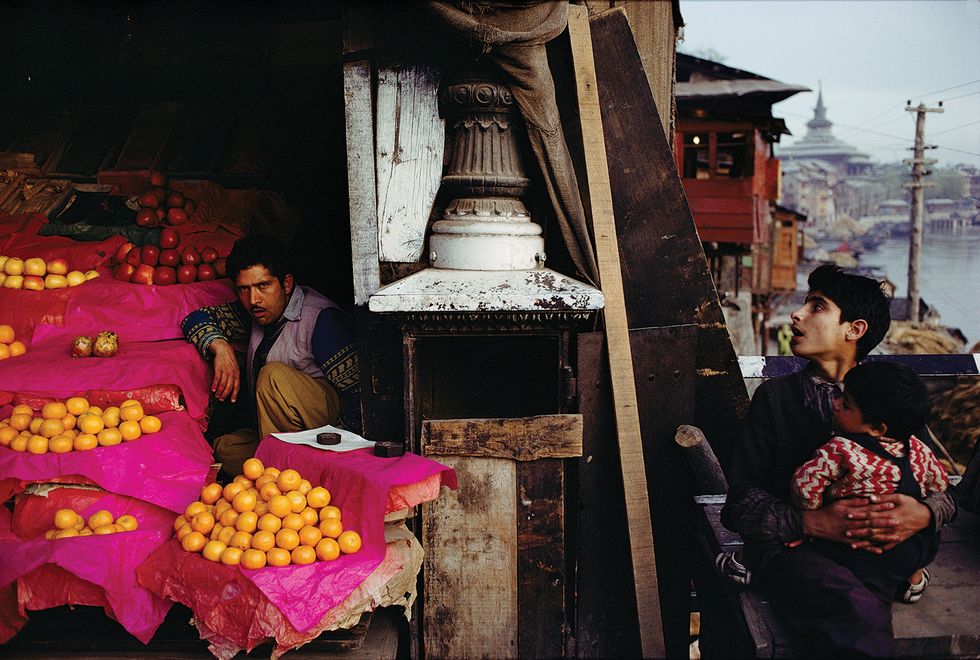 India’s living history and emerging future is the theme of this year’s FotoFest Biennial, with works by nearly 50 photographers and new-media artists from India and the Indian diaspora on view in The Silos at Sawyer Yards, Winter Street and Silver Street Studios and the Asia Society Texas Center.

During the festival, more than 120 participating galleries and museums will present their own photography shows, including Modernism on the Ganges (March 3-June 3), the first large retrospective of Raghubir Singh, one of the 20th century’s most influential photographers, on view at the MFAH. India is also the theme of the museum’s concurrent show, Peacock in the Desert: The Royal Arts of Jodhpur, India (March 4-Aug. 19), which features more than 250 objects collected across four centuries by Jodhpur’s ruling Rathore dynasty.

Born in Jaipur, the capital of India’s Rajasthan state, in 1942 to an aristocratic family, the talented Singh initially embraced a career in photojournalism. But having grown up in an environment rich in history and art, he was inspired to use the tools of his trade — a handheld 35mm camera and color Kodachrome film — to document with an artist’s eye the joy and agony of day-to-day existence on the continent he loved.

For those new to his work, looking at a Singh photograph can be disorienting, as there is no one single focal point. In “Man Diving, Ganges Floods, Benares, Uttar Pradesh,” a man caught in a mid-air, horizontal leap from the top of a temple submerged in holy, polluted waters pulls your eye away from a trio of young, seemingly fearless swimmers. In “Barber and Goddess Kali, Calcutta, West Bengal”  — Singh organized his work according to the geography of India — a barber and his client are visible between the outstretched arms of the goddess Kali, a belt of human hands around her gyrating waist. To the left, another man stands in a posture suggesting classical form, his eyes trained on another Kali statue in the foreground, cropped as if to suggest, as MFAH’s associate curator of photography Lisa Volpe puts it, “that this forest of sculptures continues off the frame.

“All of these photographs have a sense of movement,” she continues. “There’s something busy happening, but he’s frozen it, so you can really understand all the details of the work.”

The exhibit’s chronological presentation of these groundbreaking photographs, which date back to the mid-1960s — Singh died of a heart attack in 1999 — not only reveals his development as an artist, but challenges any Eurocentric definitions of modernism. “Singh introduced these incredible ideas of color and composition,” says Volpe, “which were indebted to Indian art and life, and did so in an incredibly modern way.”

Towering 400 feet above the nearby desert city of Jodhpur, Rajasthan — known as “the blue city” thanks to its abundance of indigo-colored buildings — stands the Mehrangarh Fort, built by the Rathores in the 15th century, and home to the paintings, jewelry, furniture, weapons and textiles on display in Peacock in the Desert. Contrary to the common perception of India’s rulers, or maharajas, being concerned only with leisure and spectacle, Peacock reveals the Rathore clan understood their country’s culture needed to be preserved and sustained. “For a long time, colonial writings presented the maharajas as consumers of luxury,” says Mehrangarh Museum Trust Director Karni Jasol. “But the maharajas played a unique role in maintaining the continuity of India and its traditions, right up to its independence.”

An early 18th-century Huqqa vase is among the royal artifacts on display in the MFAH’s ‘Peacock in the Desert.’

That said, Peacock in the Desert does not shy away from spectacle. The first of the exhibit’s six sections is a virtual recreation of a traditional Indian wedding procession, with horse and elephant mannequins dripping with royal regalia. Other awesome sights include an elaborately carved wood and glass palanquin, and a 17th-century silk velvet and silver gilt thread court tent, created in the royal workshop and possibly one of the oldest tents of its kind. Another elaborately staged gallery brings to life the royal zenana, or women’s wing of the palace, and provides fresh insight into the significant role of women in the royal courts.

“When queens came into the kingdom, they were assigned a certain portion of the territory,” explains Jasol. “So they were financially independent. The queen was able to undertake a lot of philanthropic work of the kingdom, and their patronage of arts and crafts is explored in the exhibition.” Jasol also points out that many bodies of water, a precious commodity in a desert kingdom, were built by the queens.

He hopes that patrons of the traveling exhibit — the MFAH is the first of three stateside stops for this show — will recognize that “India is a very experiential country,” says Jasol. “There is sound, there is smell, there are visual aspects. Visitors will get a taste of many of those aspects through this exhibition, and gain a new perspective of a beautiful country with a living culture.”

AT TOP: Raghubir Singh’s ‘Fruit Seller and a Boy with a Child’

Valentine's Day Spa Gifts for a Partner — or Yourself