Terry Suprean Paints a Colorful Commentary on the Apocalypse 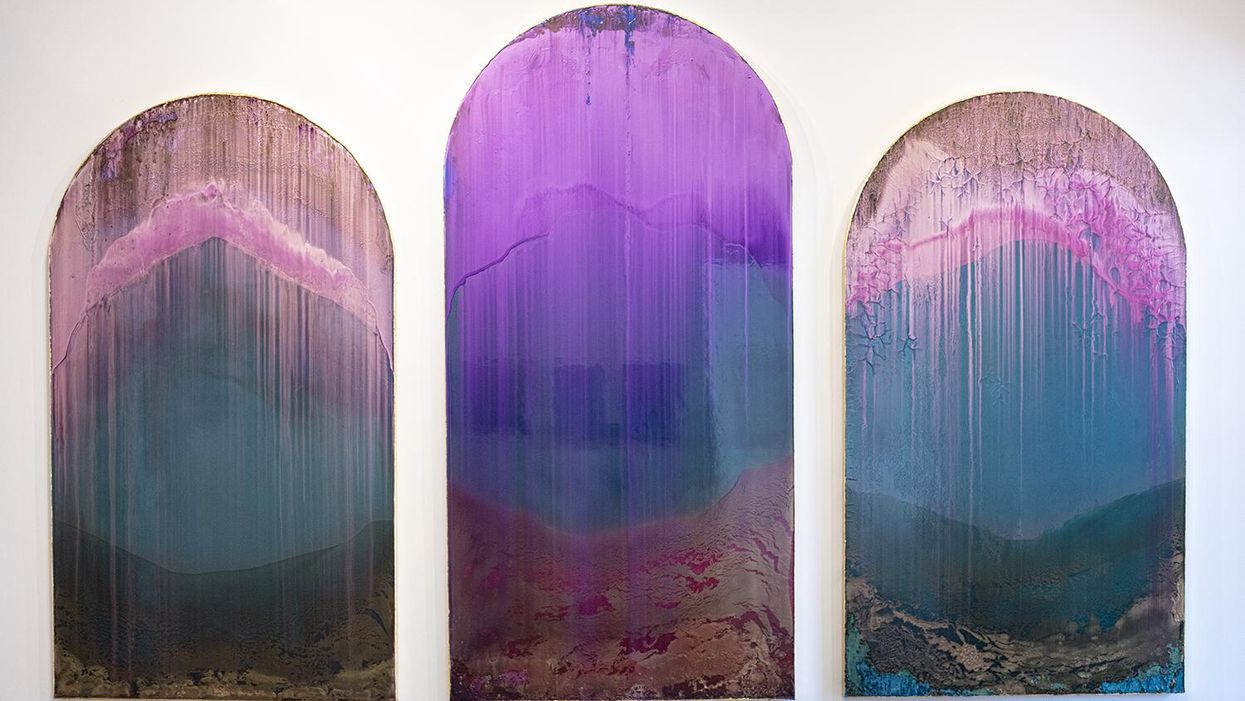 HOUSTON PAINTER TERRY Suprean, the founder and visual arts curator of H-Town's pioneering but now defunct nomadic art space Civic TV, which had its last major exhibition at the 2020 FotoFest Biennial before closing up shop amidst the pandemic, has a new solo exhibition up at Bill Arning Exhibitions that captures the zeitgeist of the human-induced environmental degradation of the Anthropocene. But in cheery colors.

The exhibition, titled Our Secret Sadness, runs through April 18 and is composed of a monumental tryptic along with 14 other paintings and a dual-channel video installation that seek to rethink landscape paintings in what the artists considers a moment of climate destruction.

Suprean used experimental, artist-made paints for each of the colorful pieces in this exhibition, often deploying natural pigments like mica, which gives the paintings their reflective, almost holographic effect. The end result of this painstaking and experimental artistic process are paintings that are equal part sunny and dystopic.

"When I started making these paintings, I thought of the connection between the ways a sedimentary landscape builds and the way these paintings build, and I began to see these paintings as a new way to make landscape paintings for this kind of moment that we live in —this Anthropocene, this moment of climate change," he says. "As they develop, they begin to develop these kind of horizon lines in them."

Although the pieces are carefully planned, some of what's been happening weatherwise has gotten embedded into the pieces as well. While resting in Suprean's garage-turn-studio during the snowpocalypse of a few weeks ago, the still-wet paint on one of the tryptic panels succumbed to the freezing temperatures and cracked in a similar way to the way mud cracks and splinters as it dehydrates.

Also included in the show is a dual-channel video installation, titled Category Five Reflection Pool, that builds further upon the idea of climate calamity. One of the videos is composed of grainy footage of the moon that Suprean captured with his cellphone through a telescope, and the other is a digital collage of extravagant floral paintings from the Dutch Golden Age of painting. The floral video collage is projected on a screen behind the footage of the moon, which is shown on a screen affixed to the top of a pedestal. Below both, on the floor, is a print of the floral video. One gets the idea of a reflection pool with the moon rising from its midst.

"This show is really about trying to create a space for collective mourning over what we've already lost to climate change and what we will continue to lose," says Suprean. "And hopefully through that collective mourning we reach some kind of healing and find a way forward."