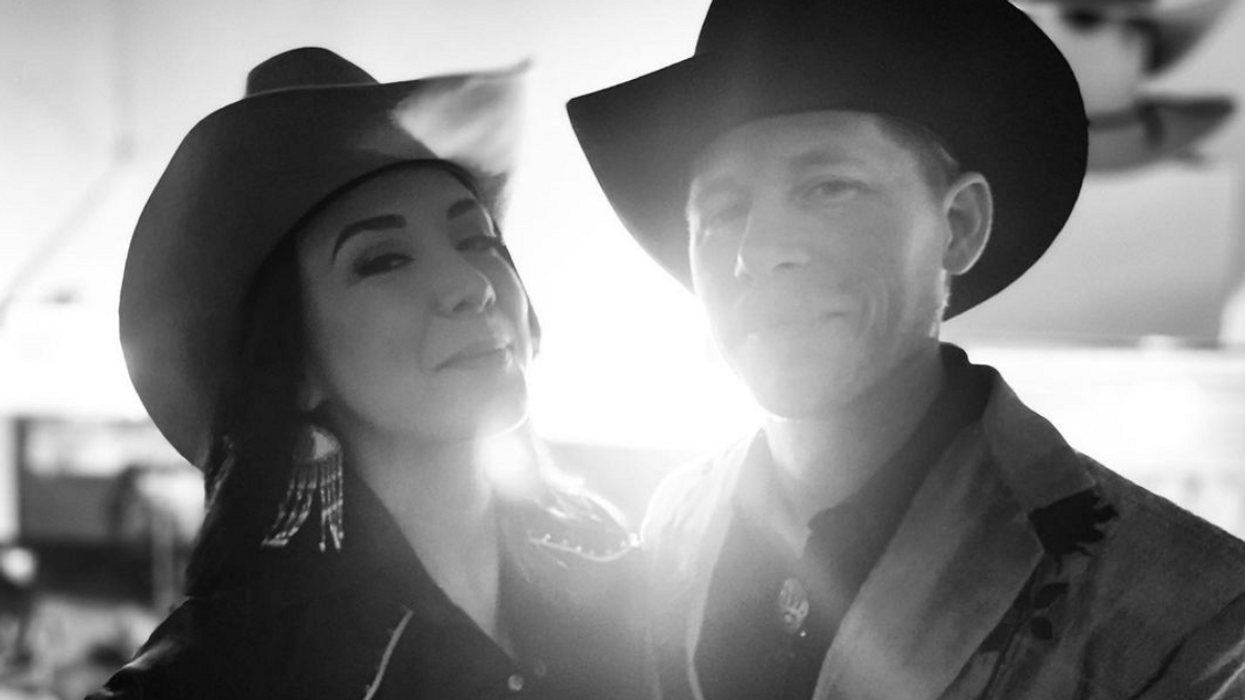 Bonnie and Ben Kennimer of Kennimer Co. (photo from @bonniekennimer on Instagram)

YOU'D BE FORGIVEN for missing the entrance to Ben Kennimer's millinery upon first entry to the fittingly masculine and no-frills Midtown space, located right across the street from The Continental Club, that the young East Texas-reared milliner shares with Big Kats Barbershop. While the barbershop occupies the ground floor of the space, Ben's hat shop calls a tiny studio perched on the second level of the space home.

Populating the emerald green walls of the lilliputian space, which is reachable by two-stepping one's way up a steep staircase, are row upon row of the handmade hats Ben and his seamstress wife Bonnie proffer up to pearl-snap-inclined customers through their popular "wild Western wear" biz Kennimer Co., as they say. The also sell elaborately embroidered and deliciously fringed duds handcrafted by Bonnie in her home studio in the East End.

Intermixed with the velvety, sometimes almost campy hats — which come in colorful, larger-than-life styles like the Tycoon, a Dallas-reminiscent affair with prominent full-frontal plumage, and which was paired with a black leather harness in a recent spread in L.A. hipster magazine Bello — are faded black and white photos of the men in Ben's family. There's a photo of Ben's grandad in a horseshoe-shaped frame, sporting a hat that Ben eventually inherited and that now sits atop his work desk. "It's all dusty and beat up," says Ben. "It's been stepped on a few times."

There's also a timeworn photo of Ben's dad, who was a boxer, posing in New Mexico with a bear he shot the same year Ben, his only son, was born. "That bear there is why I have a bear in all of the sweatbands as my logo," says Ben. "And I still have the head at my house."

"His family takes no short cuts," notes Bonnie, after Ben describes how his father built the muzzleloader he used to shoot the bear himself. Like father like son, craftmanship clearly runs in Ben's family, as indicated by Kennimer Co.'s beautifully handcrafted goods.

Although the hit Western outfitter, founded in 2017, may be young in years, it already has an expansive client list that includes hit recording artists like Nikki Lane, the Mastersons, Summer Dean and Jonathan Terrell, who often sport performance outfits crafted by the talented husband-and-wife duo.

The pair, who makes all of their bespoke goods to order and used to run a screen-printing shop together before falling into their current endeavor, met by chance at a mutual friend's birthday pool party when the two were living in Austin, and they've been making music together ever since. "She rolled up carrying a six-pack of PBR and wearing an Anthrax shirt, and I was like, 'Man, I'm done. I'm done for,'" remembers Ben with a chuckle.

"And he was wearing a leather vest with no shirt on at the f---ing pool," laughs Bonnie. "So, I mean, what else were we going to do?"

Bonnie, who has a background in costumes and vintage, started making alterations to her clothing when she was really young, and she spent time working at costume stores like Austin's famous Lucy in the Skies before she and Ben, who spent over 20 years in the screen-printer trade, decided to leave screen printing behind to more seriously pursue their Western wear endeavor. "We really tumbled into this thing together," she says. "We fed off of each other's inspirations so much. I don't even remember how it happened because it was so natural."

"I promised myself that this wasn't going to be a business," says Ben of when he first got into hat making, just to see if he could do it. "It was going to be a trade that I just wanted to learn and do, but people liked them, and you have to give people what they want."

After doing an event at Manready Mercantile, Travis Weaver, the popular boutique's owner, told them that they should really consider selling their goods to a larger audience. "That was a big moment," says Bonnie. "We love that store so much, so it was such a big deal to hear someone like that, who we respect so much, say that."

There's now a Kennimer Co. hat wall in the popular boutique displaying a selection of ready-to-wear hats that customers can snatch up on the spot in lieu of coming into Ben's millinery for a custom fitting. Due to a backlog of orders, it takes up to 13 weeks for Ben to make one of his custom hats from start to finish, so it's helpful, he says, that they have a big presence at Manready.

And now that they're getting more established, Bonnie and Ben are eyeing expanding the biz, with Ben hoping to get a small, curated selection of his hats into three to four additional stores, and with Bonnie eager to create a ready-to-wear line that she can also get into some stores.

"Since everything we do is custom, I'd like to have some everyday shirts available to people. That's a big thing for me," she says. "I make a lot of classic Western shirts for Ben, and people want them so bad."