They might be politically outspoken and unafraid of spilled milk, but mostly Giant Kitty just wants you to have fun. 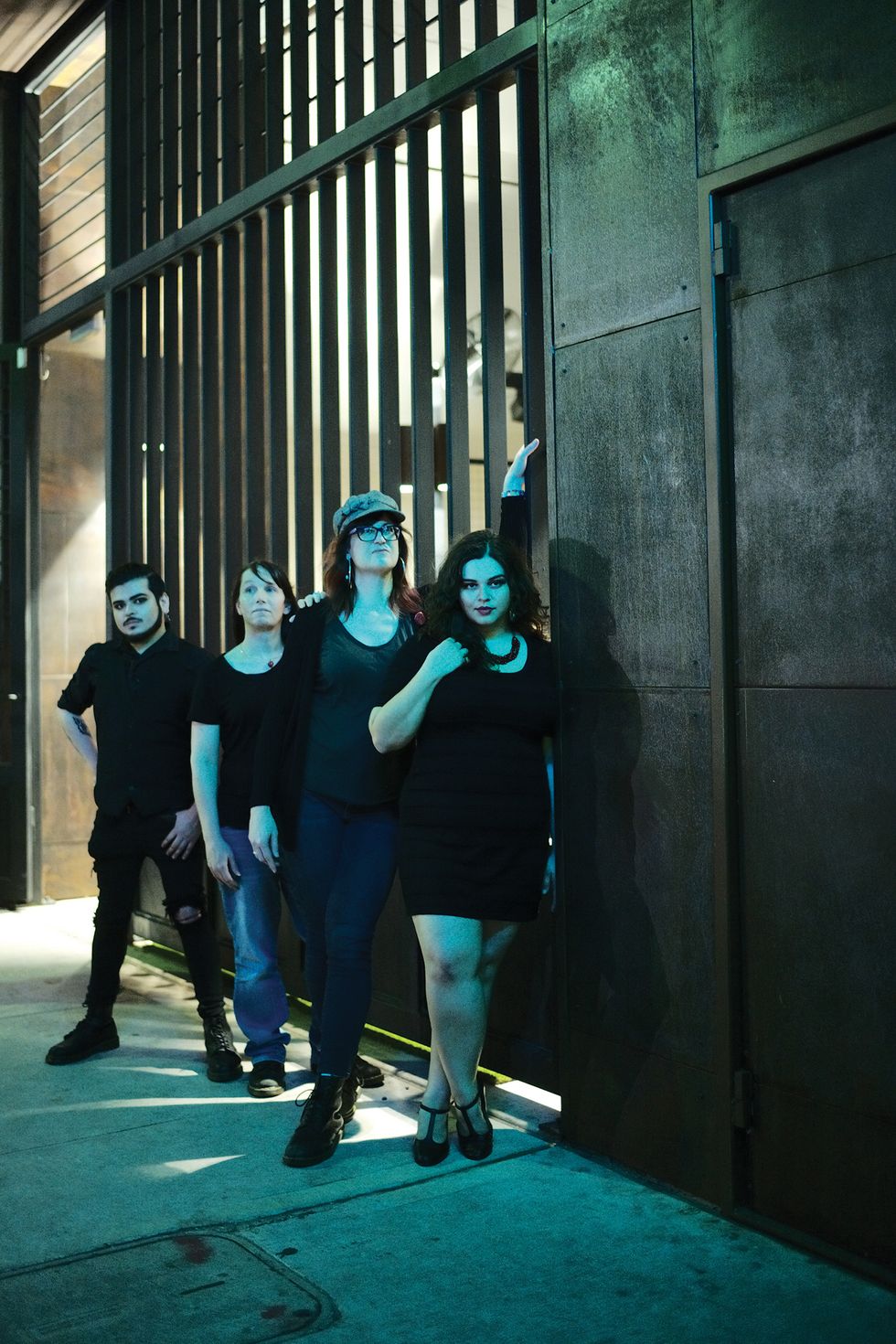 Music is too serious nowadays, says Cassandra Chiles. “I think it’s that way in art in general,” says the guitarist in fun-as-all-get-out, Houston-based “riot grrrl” — a.k.a. feminist punk — band Giant Kitty. She recalls what she feels were less serious times: “The Pop Art movement of the ’60s, the absurdity of it all. Even stuff in the ’80s or ’90s. You look at a band like The Presidents of the United States of America. Who could’ve taken those guys seriously? But it sure was fun. I wish there was more of that now.”

Going to see the four-piece band, which is named after a song by the equally jovial Japanese band Shonen Knife, is a mandatory good time. For example, Giant Kitty’s repertoire includes a rockabilly-punk love song about Geo Metros. And one show featured founding members Chiles and drummer Trinity Quirk getting married onstage (and officiated by lead singer Miriam Hakim) during the actual set.

While the concerts may offer definite fun, the band, which is rounded out by bassist Roger Medina, has garnered attention for its equally pronounced political stance. Publications such as Billboard, Spin and Huffington Post have highlighted the group for moves like raising $2,000 for the American Civil Liberties Union of Texas following President Trump’s immigration ban (Hakim is Syrian-American) and pulling out of a festival due to the organizer’s transphobic remarks (two of the band’s members are transgender).

Perhaps it’s true that there’s no such thing as bad press. On the heels of releasing a new 19-track album called Rampage — which features a guest spot by Houston rapper Fat Tony, narration by Neko Case member Kelly Hogan and a song about Benadryl — the band was also an official artist at this year’s SXSW, playing a showcase gig headlined by rapper Bun B at Austin’s Highland Lounge.

Rampage is quite slick for a punk record, thanks to engineer Brian Baker, who worked on the Geto Boys’ 1991 stratospheric hit “Mind Playing Tricks on Me.” The band said that Baker put them through the ringer at the Spring Branch-area Sound Art Studios, but it paid off. “There was one bit in one of the songs that I did 23 times, but it was worth it,” says Chiles, who, by day, works IT at an engineering firm.

Looking to the rest of the year, Giant Kitty says they’re scheduled to appear in a National Geographic photo essay that chronicles the lives of Muslims in America. Additionally, the SXSW-knighted band plans to continue playing shows in support of Rampage — a mini-tour of Texas is in the works — and showing folks just about the most fun someone can have at a show these days.

CityBook Workshop
Al Torres
How did you get to where you are today? It takes a village. I was fortunate enough to have great mentors and individuals who instilled confidence in me. I think that when you face a challenge or an obstacle, you are able to overcome and make things happen. You can continue moving forward, more resilient over time.
Keep ReadingShow less
news

IT’S HARD TO fathom 37,500 bottles of wine in one restaurant (hello, Mastro’s!) or even the 4,000-plus selections of wine stocked at the original Pappas Bros. Steakhouse on Westheimer. No surprise, both high-end steakhouses garnered the top honor awards by Wine Spectator this year.

HERE’S AN ARTFUL way to stay cool this month. The Museum of Fine Arts, Houston rolls out a six-film mini-series The Mathematician Moviegoer on Saturday, July 9, beginning with Giant (1953), George Stevens’ epic if somewhat shambolic celebration of the transformative power of black gold, starring three of 1950s Hollywood’s sexiest actors: Rock Hudson, Elizabeth Taylor and James Dean. (At one point Dean, a dedicated “method” actor, manages to pull off an Oscar-worthy scene with his body completely covered in crude oil.)

Brimming with Joy! The Sunny, Colorful ‘Hats in the Park’ Lunch Returns to Hermann Park