A Day in the Life of the Arts

In H-Town, culture never takes a day off. From a black-tie dinner at which patrons rub elbows with a superstar, well into the wee hours of a new day, to a drag queen putting on her face ’round midnight. Photographers Fulton Davenport, Jhane Hoang, Shannon O’Hara, Daniel Ortiz and Todd Spoth capture it all, and many more everyday wonders of making art in Houston, over the 24 hours of Thursday, Sept. 27. With Reporting by Chris Becker 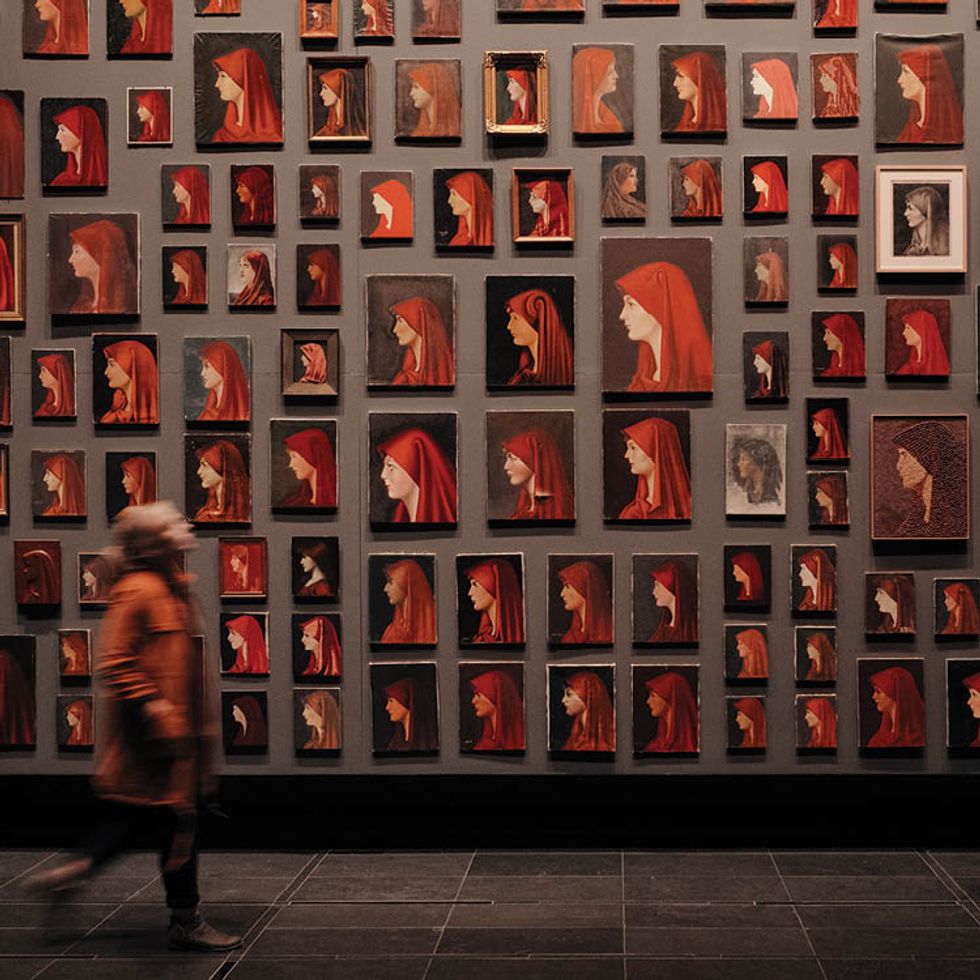 Plácido Domingo makes the rounds after his Sept. 26 concert, the first HGO event in the Wortham since Harvey. Organizers anticipated the Spanish tenor, 77, would depart the post-show dinner at The Post Oak Hotel around 11pm. But well into the morning of Sept. 27, he gamely greets friends and admirers. For more on the dinner, see “Homecoming Haute” in Party People. Photo by Jhane Hoang.

Anish Kapoor’s stainless steel “Cloud Column” strikes a moody, majestic pose on the plaza fronting the MFAH’s new Glassell School. The sculpture sparked a war of words with Chicago when it was installed in March, as it resembles the Windy City’s famous “Bean,” also by Kapoor. “Our bean is … the better bean,” insisted a Houston Chronicle columnist at the time. Photo by Daniel Ortiz.

Shawn Renzoh Head fills his sunlit studio in northwest Houston with sound of the shakuhachi, a bamboo flute that demands years of study to master. Head is rehearsing for a concert of newly composed music for this ancient instrument, Nov. 18 at 14 Pews. Photo by Todd Spoth.

Painter, sculptor and environmental artist Charles Washington touches up a painting at The Pop Up Place, his immersive, community venue for arts activities and live music on Almeda Road. Using recycled and repurposed materials, Washington celebrates the history and vitality of Houston’s Third Ward. Photo by Daniel Ortiz.

Zach Gresham, MD Anderson’s Arts in Medicine program manager, leads an art class at the hospital’s Children’s Cancer Center. His sessions are designed to give the kids a sense of control and purpose, make them feel more at home, and build community. Photo by Fulton Davenport.

Inside the Byzantine Fresco Chapel hang more than 450 reproductions of Jean-Jacques Henner’s 1885 painting of Roman Saint Fabiola. Once a consecrated church, the Chapel is part of the Menil Collection, which reopened its renovated main building in September and opens its highly anticipated Menil Drawing Institute in November. Photo by Todd Spoth.

Students at North Shore High School in northeast Houston pour scarlet dust into sidewalk cracks, creating an installation. It’s part of a much bigger series of works: Artist Molly Gochman created the Houston/New York-based Red Sand Project in 2014 and has since engaged 1.5 million people in what she calls “participatory artwork” intended to increase awareness of human trafficking. A similar 700-feet-long piece is being installed on a mesa at Bush airport which will be visible to aircraft above for three months. Photo by Fulton Davenport.

Artists put the finishing touches on one of 11 “shadow theaters” that make up MoonGarden, an installation at Discovery Green. At night, the orbs, which were as large as 30 feet in diameter, glowed, revealing dancing shadow puppets. Photo by Shannon O’Hara.

Grass is applied to the center island of the set for Twelfth Night, designed by Todd Rosenthal, at the Alley Theatre. In the days to follow, an intricate water feature would also be added. The show runs through Oct. 28. Photo by Daniel Ortiz.

At the Houston Center for Contemporary Craft, Horacio Casillas adds another brick to his sculpture “Community Well.” Casillas is one of 36 artists selected for CraftTexas 2018, in which traditional craft materials are used in decidedly non-traditional ways, on view through Jan. 6.  Photo by Shannon O’Hara.

Muralist Shelbi Nicole hangs out at her Whimsy World pop-up gallery, which opens Downtown in February. The artist is known for her colorful, abstract, self-described “feel-good” works with recurring 3-D-like patterns. Whimsy World aims to be the most “Instagrammable” art space in Houston. Photo by Daniel Ortiz.

Using just his hands, a pottery wheel and a little imagination, a student in the newly built Glassell Junior School’s ceramics class transforms a bit of clay into an original piece of art. The Glassell’s after-school programs nurture budding artists ages 3 to 18. Photo by Jhane Hoang.

Arms crossed, deep in the groove, visitors dance in their heads during a “silent disco,” a special live broadcast from KTRU of contemporary African music, while exploring the African art collection at the MFAH in the Museum District. Photo by Jhane Hoang.

Happy hour at the MFAH gets even happier, thanks to the dynamic movement and sounds of the KoumanKe’le’ African Dance & Drum Ensemble. On Dec. 1 at the Hobby Center, the ensemble performs in Houston’s Urban Nutcracker. Photo by Shannon O’Hara.

Samir Mojaddedi, a member of ComedySportz Houston, introduces the troupe’s long-form improv team, Better Linda, at its weekly EaDo Comedy Show. Mojaddedi has been a CSz member for nearly a decade. Photo by Shannon O’Hara.

Lead singer Kam Franklin soaks up the spotlight during the Suffers’ Party on the Plaza performance, a free concert presented by the city, at Avenida Houston across from Discovery Green. Photo by Jhane Hoang.

Rec Room Artistic Director Matt Hune strides the set of Exit Strategy, moments after the curtain closed on the second show of its two-week run. The play tells the story of a Chicago public high school slated for closure at the end of the school year. Photo by Jhane Hoang.

Queen for a day? Yasss! Angelina DM Trailz gets an assist from her drag sisters before entertaining rowdy patrons at JR’s bar in Montrose. In recent years, drag has bounded out of the counterculture’s shadows, with shows highlighting self-engineered feats of costume design, makeup artistry and bold performance staged around Houston almost nightly. Trailz, 24, is a regular at Guava Lamp Lounge. Photo by Jhane Hoang.

What a Stud(s)! Celeb-Fave Ear-Piercing Boutique Bows in Rice Village