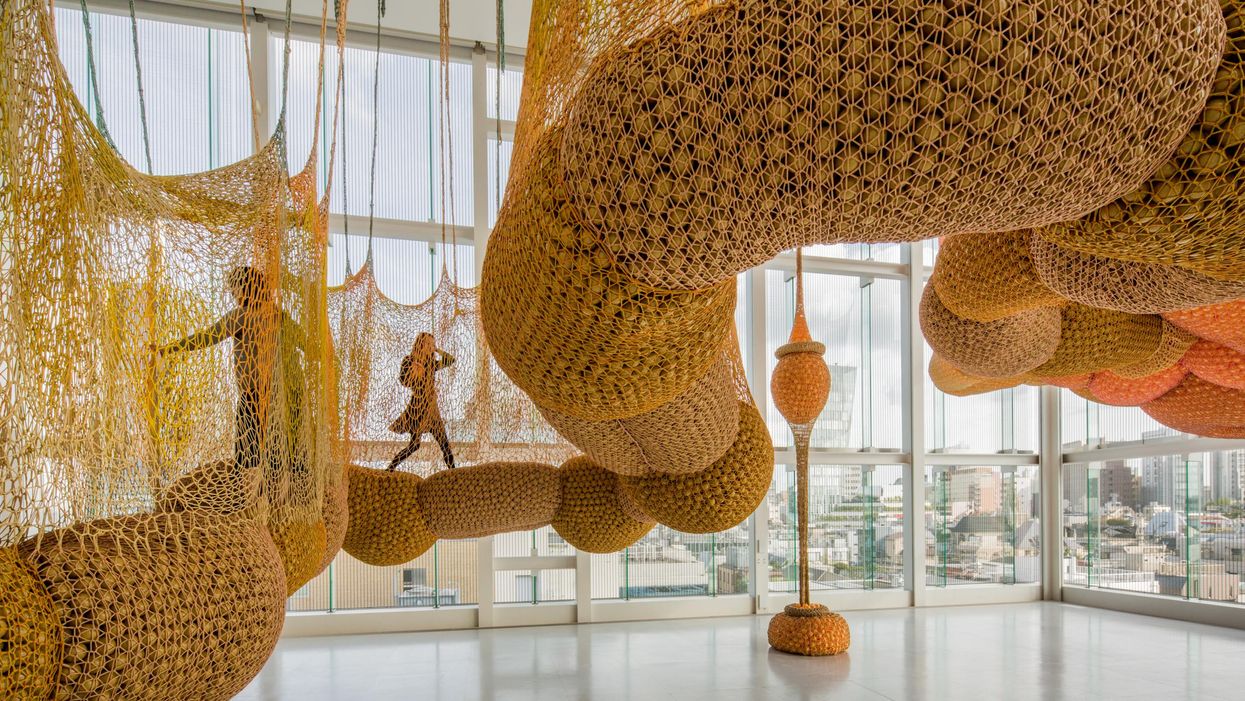 TRAVERSING THE MUSEUM of Fine Arts, Houston's expansive campus, which now includes the newly inaugurated Nancy and Rich Kinder Building, on foot has always been a bit of a workout. But starting this summer, the museum's patrons will be able to get their sweat on — and find their inner balance — while trapesing through a crocheted monolith suspended high above the museum's more normal lanes of foot traffic.

SunForceOceanLife, a spiraling, structural marvel by renowned Brazilian artist Ernesto Neto made from yellow, orange and green materials that will be hand-woven into several patterns before being sown together in spiral form, will take over the museum's Cullinan Hall from May 30 through Oct. 3 as part of the seventh installment of the MFAH's summer immersive art series.

One of the largest crochet works to date by Neto, the massive immersive art piece, which clocks in at nearly 30 feet by 79 feet by 55 feet, will take a team of a dozen people three weeks to construct — which they will be doing while being suspended 12 feet in the air. The traversable spiral of a structure, which will be filled with soft plastic balls to help cushion the feet of its intrepid explorers, will be suspended from the ceiling of Cullinan Hall with one point of entry and one point of exit.

"A structural feat, this site-specific piece … takes inspiration from the artist's long-term study of and commitment to the art, culture and traditions of various cultures that form Brazil," said Mari Carmen Ramírez, Wortham curator of Latin American Art and founding director of the International Center for the Arts, MFAH, in a statement. "Neto transforms crochet, a popular Brazilian craft, taught to him by his grandmother and typically executed by women on a small, delicate scale, into massive structures that float several feet above the ground."

"SunForceOceanLife is about fire, the vital energy that enables life on this planet," said artist Neto about the work, which he says mimics a hammock by providing people with a joyful and inviting place to relax and uncouple their bodies from their conscious minds. "Every time we complete one crocheted spiral with the polymer string used in this work, we burn both ends with fire in a gesture that evokes meditation, prayer and other sacred rituals.

"I hope that the experience of this work will feel like a chant made in gratitude to the gigantic ball of fire we call the sun," he added, "a gesture of thanks for the energy, truth and power that it shares with us as it touches our land, our oceans and our life."