Part Artist and Part Forensic Scientist, Lartigue Is an Avant-Garde ‘Angel’ of Death and Decay 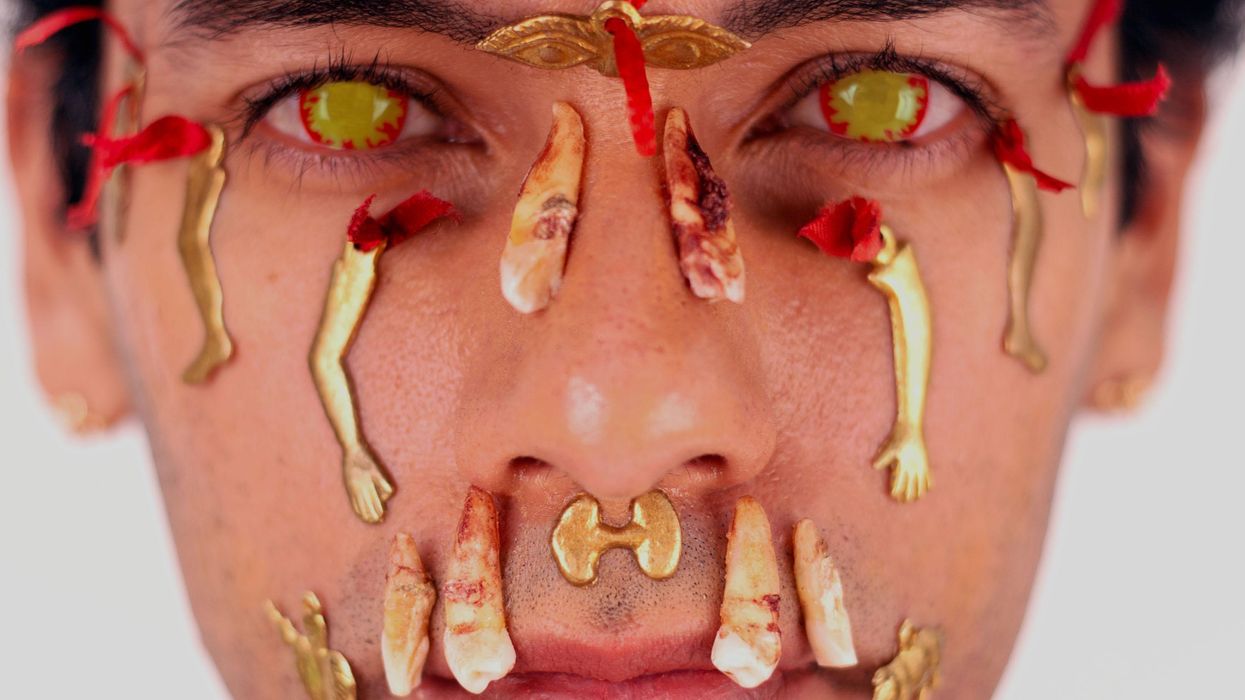 "QUEER AND TRANS archaeology lives within the deteriorations of history," reads part of a poem included in a recent performance by Houston-reared trans artist-activist Angel Lartigue. Her work, which she calls "bacteriomancy," often involves using bacteria and fungi — including some gleaned from the occasional human cadaver — to explore ideas rooted in forensic anthropology, biotechnology, race and gender identity.

The performance — part of a series titled "without architecture" that was presented last month by a group of Latinx artists exploring, they say, the convergence of politics and the "built environment" in the rapidly shifting demographics of Houston's historic Montrose "Gayborhood" — involved Lartigue and cohorts artistically "burglarizing" the site that was once home to Mary's Naturally, the historic gay bar whose former premises are now home to a gourmet coffeehouse. The site of the gay bar, once the oldest in Texas, is estimated by LGBTQ+ historians to be the final resting place of as many as 300 who perished in the AIDS epidemic, with their ashes scattered on the grounds. This is sacred ground.

For the performance, Lartigue and her team of "bio burglars," decked out in handmade masks depicting mythical shapeshifting shamans, touched parts of the building — the walls, lamp posts and concrete — before returning their hands to acrylic purses they were carrying. The process was meant to allow them to transfer bacteria and fungi into the purses. Part of the idea of the piece, says Lartigue, was to pay homage to the microbial memories of the hallowed space, and in doing so present a commentary on gentrification — what they call the violence of capitalist architecture.

"I saw this as us stealing material from Mary's," says Lartigue, who is currently affiliated with the South Texas Human Rights Center, an organization based in Falfurrias, Texas, that's dedicated to preventing migrant deaths and helping families locate missing loved ones along the US-Mexico border. "We were not actually breaking in physically into the coffee shop, but we were stealing the surface of the architecture.

"One of the highlights of the performance is that I went up and sat on the roof," she continues. "When you look at vintage photos of Mary's from the '70s and '80s during Pride, people would sit on top of the building. I wanted to kind of mimic that. It was reminiscent of us being ghosts of that space."

Lartigue, who passed much of last year creating art in Mexico City after a planned in-person residency with SymbioticA Lab in Perth, Australia, quickly became a remote residency when the pandemic rolled in, says that her unique and oftentimes stenchy artistic process, which many no doubt find a bit disturbing, has as much to do with science as it has to do with art. "It's a hybrid of performance and research," she says. "I talk a lot about the relationship between the land and the body."

"to excavate is to destroy," part of curated series without architecture, photo documentation by Tere Garcia

The implementation of biological material is indeed central to much of Lartigue's work, and it's very personal. Her great-uncle disappeared in an attempt to cross the US-Mexico border. After her grandfather — the lost man's brother — died a few years ago, Lartigue began making pieces of art from biomaterial. Think feathers, roots, mud and clay gathered from burial sites in South Texas, bits of terrain that had been touched by the souls of black and brown bodies, which had been absorbed into the fauna and flora of the sites.

"My interest in this wasn't necessarily an anguished decision to 'find' my grandfather's brother, or to claim his 'unidentified' body, but to find testimony within the landscape," says Lartigue in an essay she wrote about her artistic process that was presented at an art and science conference in Vienna.

Lartigue explored those ideas further while undergoing forensic training in human remains recovery and engaging in studies in human decomposition. Samples of bacteria from her work in that training were later used to grow bacteria on Petri dishes that were used in a series of performances around Houston in 2018 and 2019. At one, local trans artist Farrah Fang was decked out in a "necro garment" made of Lartigue's bacteria-laden Petri dishes, and insect larva was thrown onto the dancefloor amidst a soundscape of pulsating industrial beats.

It's pretty intense stuff. Latrigue doesn't call herself a "sculptor of putrefaction" for nothing.

But, of course, her work is ultimately about life, and growth. In her capacity at the South Texas Human Rights Center, where she leads short-term residencies for other artists, Lartigue hopes to use her tenacity for thinking outside the box to help others dive more deeply into their own unique creative processes. "It's for the artists to come and experience the landscape here and to work with whatever they need for their creative process," she says. "I see myself as a sort of shaman creating a cenote here."