A Day in the Life of the Arts

The arts culture of Houston never stops — from rap shows that bound into the wee hours of a new day to a solitary painter putting the finishing touches on a canvas, wine glass at hand, just before midnight. Five photographers take on the task of capturing the everyday wonders of art in houston, over the 24 hours of Wednesday, Oct. 4, 2017. What they find, just weeks after Harvey, is a creative class quickly regrouping and overcoming, doing what it does best — challenging conventions, breaking down barriers and seeking to lift up the human spirit. Produced by Patrick Magee and Chris Becker; 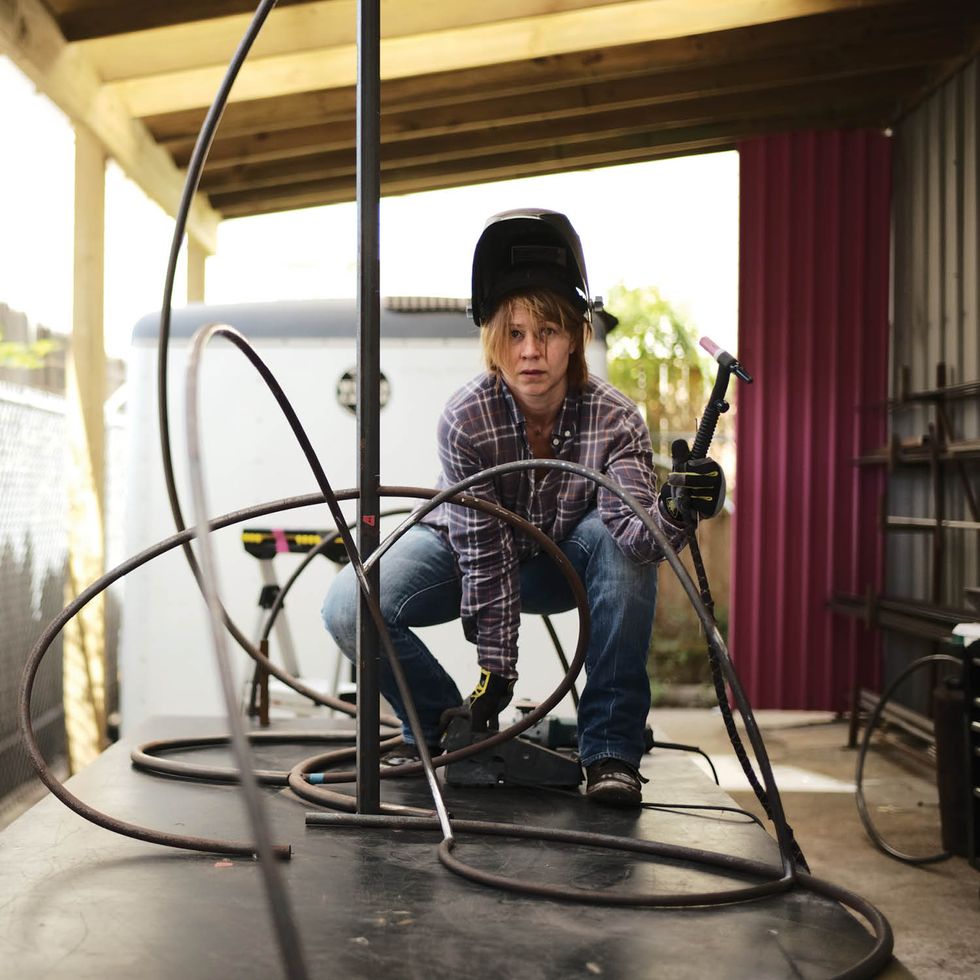 Editors’ Note: There are signs everywhere that Houston, and its arts community, are beginning their comeback as the city moves into a new phase of the pandemic. Lest we forget, artists faced huge struggles before, in the wake of Hurricane Harvey not so long ago. Just weeks after the storm, we chronicled their resilience in our first-ever “Day in the Life of the Arts” photo essay.

Popular and critically lauded Houston-based rapper Fat Tony, a Nigerian-American, belts out the final beats of his show at Walter’s, a music venue on the northern edge of Downtown and the Warehouse District. Photo by Todd Spoth.

The sun rises over Hermann Park, illuminating Sharon Engelstein’s bubbly installation ‘Dillidiidae.’ In honor of its centennial year in 2014, Hermann Park Conservancy launched its Art in the Park initiative to increase awareness and enjoyment of public art. Photo by Daniel Ortiz.

Ash Danceworks dancer and director Rebecca French greets the morning on the terrace of her Galleria-area apartment with a healthy stretch. French is guest choreographer at Rice Dance Theater this fall, where she will premiere her multimedia piece ‘From the Ground’ Nov. 16-18. Photo by Daniel Ortiz.

Artist and DJ Tierney Malone pays tribute to Houston jazz legends Arnett Cobb and others in his new mural in Rice Village, which will be completed in November. An advocate of the city’s jazz community, Malone hosts Houston Jazz Spotlight Live at Midtown’s Mongoose and Cobra the first Monday of every month. Photo by Daniel Ortiz.

A museum-goer arriving just after the Menil opens takes in paintings by Edward Ruscha and Jean-Michel Basquiat, which hang in the museum’s ‘Thirty Works for Thirty Years’ exhibition. The show runs through January. Photo by Todd Spoth.

Mercury musicians crowd the gym at St. Paul’s in the Museum District, a temporary post-Harvey rehearsal space, to practice for a show three days hence at Rice’s Stude Concert Hall. Their usual home, the Wortham, was damaged by the storm. Photo by Shannon O’Hara.

Drama students at Carnegie Vanguard High — fueled up after sharing lunch in theater department, per their daily custom — get physical in teacher Steward Savage’s advanced class. The school’s thesps have won multiple state championships for acting and stagecraft. Photo by Shannon O’Hara.

SugarHill Recording Studios engineer Jeremy Rojas listens for the sweet spot at a mid-day recording session. Founded in 1941, SugarHill is a musical landmark where such Texas icons as Beyoncé, Willie Nelson and Freddy Fender have all recorded hits. Photo by Todd Spoth.

At her workshop in Montrose, sculptor Tara Conley rolls, bends and twists steel, bronze and fiberglass into large-scale public art works seen throughout Houston and Louisiana and across America. She’s at work today on her latest series, which transforms the anthropologic shapes of snails into expansive flowing curves and dancing lines. Photo by Daniel Ortiz.

Taking advantage of an off week for the Houston Ballet — no performances, no scheduled rehearsals — Principal Dancer Ian Casady has a large studio in the company’s Downtown digs all to himself for a private workout. Photo by Shannon O’Hara.

Erin Locke of the Periwinkle Foundation and Carol Herron, Coordinator of the Periwinkle Arts in Medicine Program at Texas Children’s Cancer and Hematology Centers, organize submissions from young patients for the hospital’s annual ‘Making A Mark’ art exhibit. Photo by Daniel Ortiz.

The Alley Theatre’s Melissa Pritchett puts on her wig before taking the stage in ‘Describe the Night,’ which was displaced to UH’s Quintero Theater post-Harvey. The Alley returns to its home for ‘A Christmas Carol.’ Photo by Todd Spoth.

Robert Ellis and his band jam at Discovery Green’s Party on the Plaza, with the park’s vivid installation ‘Arcade’ for a backdrop. The dynamic sculpture by Dallas-based duo The Color Condition hangs through Nov. 15. Photo by Shannon O’Hara.

In the first of a string of events previewing ‘The Glamour and Romance of Oscar de la Renta’ at MFAH in the Museum District, donors enjoy a sneak peek of the late designer’s gowns — and a few cocktails. Photo by Shannon O’Hara.

Frontwoman Cammie Gilbert lets out a howl as her heavy-metal band Oceans of Slumber rehearses late into the evening at Francisco Studios in EaDo. The group’s next album, ‘The Banished Heart,’ is set to drop in March. Photo by Todd Spoth.

With dozens of brushes at the ready — and one bottle of wine — young artist Wood Fancher Anthony applies the last few strokes to a painting in his Montrose home. Photo by Todd Spoth.