A Day in the Life of the Arts, Presented by Deutsch Fine Jewelry

The arts culture of Houston never stops — from a late-night salsa show that dances on into the wee hours of a new day, to a solitary sculptor working on a haunting papier-mâché piece just before midnight. Photographers Fulton Davenport, Jhane Hoang, Shannon O’Hara, Daniel Ortiz and Todd Spoth capture it all, and many more everyday wonders of making art in Houston, over the 24 hours of Friday, Sept. 27. With Reporting by Chris Becker. 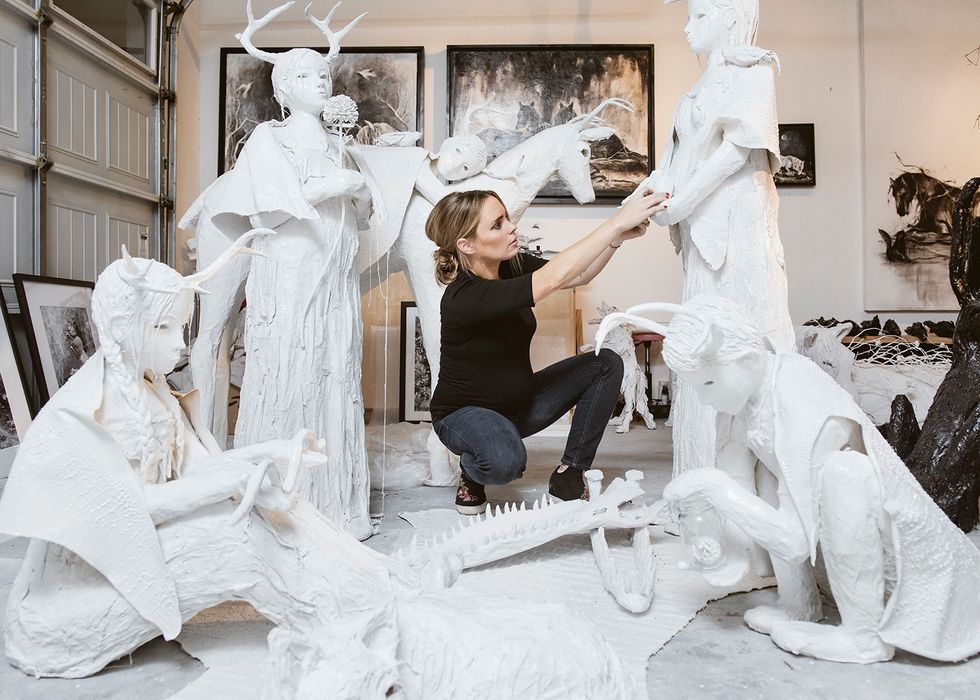 In the early morning hours, Houston’s La Orquesta Salmerum has the dance floor packed at Downtown’s Sambuca restaurant. With a repertoire spanning 60 years of salsa hits, Salmerum are keepers of the flame in the city’s vibrant and diverse Latin American music scene. Photo by Jhane Hoang.

Alton DuLaney, the newly named curator of public art for the Houston Airport System, makes his rounds to inspect the installations in IAH’s Terminal A, including  “Countree Music” by Texas artist Terry Allen. Photo by Shannon O’Hara.

Houston Symphony concertmaster Yoonshin Song rehearses with the orchestra. Song moved here from Detroit when she was appointed to the position in the spring, after the company’s three-year-long search. Photo by Daniel Ortiz.

A writer types during a Writing Café session at Inprint in the Museum District. Inprint hosts freelancers and creatives on Fridays, offering coffee and a quiet space in which to work. Photo by Fulton Davenport.

Jazz pianist, composer and Hammond B-3 master Bobby Lyle begins the day with some casual practice at his beloved grand piano in his North Houston home. Never one to rest on his laurels, Lyle is fond of saying, “You never stop learning to play this music.” Photo by Shannon O’Hara.

Hard at work in her Westchase studio, artist Orna Feinstein turns the wheel of an enormous press used to create her multilayered monoprints. Feinstein’s unconventional art, inspired in part by shapes and patterns found in nature, can be viewed at Anya Tish Gallery. Photo by Todd Spoth.

Actress Kim Wong is lifted overhead by her castmates during a rehearsal of the Alley Theatre’s production of the Vietnam War-era comedy ‘Vietgone,’ which opened in mid-October to rave reviews and runs through Nov. 3. Photo by Jhane Hoang.

“Crate diggers” at Vinal Edge (far above, left), Black Dog Records (just above, left), and Sig’s Lagoon (above right) — three independent record stores — flip through, inspect and even smell hundreds of albums. This year, vinyl will outsell CDs for the first time since 1986. Photos by Daniel Ortiz and Todd Spoth.

Actors Wonza Johnson and Sophia Introna rehearse a scene for TUTS’ production of ‘Spring Awakening,’ the coming-of-age rock musical that played at the Hobby Center in October. Photo by Todd Spoth.

An Instagrammer takes a selfie in Playhaus HTX, one of several pop-up art galleries that opened in Houston this year — offering artful, and often downright strange, backdrops and props for social-media content. Photo by Todd Spoth.

With its combination of raw cotton, textiles and metal tools, the haunting installation ‘Harvest,’ by artists Ann Sole Sister Johnson and Kaneem Smith, on view at the Houston Museum of African American Culture, compels visitors to contemplate the legacy of slavery and the depletion of Earth’s natural resources. Photo by Jhane Hoang.

Using bolts of silk hung from the studio’s high ceiling, young dancers take flight in an aerial dance class at Hunter Dance Center in the Heights. It’s one of several classes Hunter Dance offers to students of all ages and interests, be it ballet, hip-hop or modern. Photo by Daniel Ortiz.

A trio of images depict performances at MATCH in Midtown. From top, Catastrophic Theatre’s Bryan Kaplun gets dressed for ‘Tragedy: A Tragedy;’ Erberk Eryilmaz welcomes the audience to his musical piece ‘Folk Art,’ performed by the Apollo Chamber Players; a member of Uptown Dance Company emerges from her dressing room just before  the group’s ‘Reawaken’ takes the stage. Photos by Jhane Hoang.

Snapshots capture a busy Friday night in the Theater District. From top: The Houston Ballet took the stage at the Wortham; the Alley presented ‘The Winter’s Tale;’ and, just above, the Houston Symphony accompanied pianist Jean-Yves Thibaudet for a concert at Jones Hall. Photos by Shannon O’Hara.

In rehearsal, the cast of Houston Grand Opera’s ‘Saul’ gathers to listen to feedback from director Donna Stirrup, as Goliath’s severed head, blinded in one eye, steals the spotlight. Photo by Shannon O’Hara.

Sleight-of-hand magician Ben Jackson shuffles a deck of cards during the second of two ‘Magic, Music & Mayhem’ shows at the Four Seasons. He performs several times a month at venues that also include HMNS. Photo by Daniel Ortiz.

Houston funksters If You Have to Ask lay down the groove at First Ward’s Cafeza, a café with a neighborhood vibe serving Spanish and Latin Amercian cuisine, and featuring free performances by singers, DJs and poets nearly every night of the week. Photo by Todd Spoth.

Who Are You Calling Tacky?! At Festive Function, YoPros Stuff Backpacks Instead of Stockings